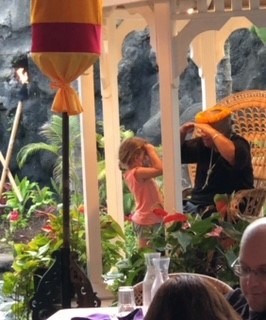 The Queen and four-year-old Aspen

Just wanted to show you what WOWING the CUSTOMERS looks like !! On Tuesday, Apr 27th, we had a four-year-old named Aspen come onstage for the keiki hula. She sat on the far left and seemed distracted during the hula so she wasn’t following along. Eventually, she walked off stage and ended up climbing the stairs approaching the Queen (Ellen Gay Dela Rosa). Ellen Gay immediately began to teach her the hula! Their interactions had everyone drawn to them.

I believed it was exactly what Queen Liliuokalani would have done!  At the end of that segment, an older girl who was on stage and had Down’s syndrome stopped in front of the Queen to bow and blow her a kiss on her way back to her seat. Both things happened back to back and left a lasting impression on everyone present at the luau! Thankful for Ellen Gay and the way she is able to WOW everyone.

Let’s keep this up ✨ Aloha, Sia

This Wednesday, May 5th final night for the Fireknife Championship

This Wednesday, May 5th, is the final event for the 28th Annual World Fireknife Championship! 15 men will vie for the title of “World Champion” in a preliminary round followed by the finals with the awards ceremony to be held right after on the same evening. Because there was an inadequate number of women entered to justify holding a competition for them this year, they will still participate in exhibition performances during the evening.

It begins at 6:30pm in the Pacific Theater with a few remaining tickets being sold online at www.worldfireknife.com or by calling our Reservations Office at 808-293-3333.

Job openings continue to be added at the Polynesian Cultural Center.  We would like you to invite friends and family members to look at these jobs. Positions will also be available to high school students for summer employment.  We recommend they apply now if they want to work during the summer.

It is easy to apply online.  Refer them to Polynesia Application 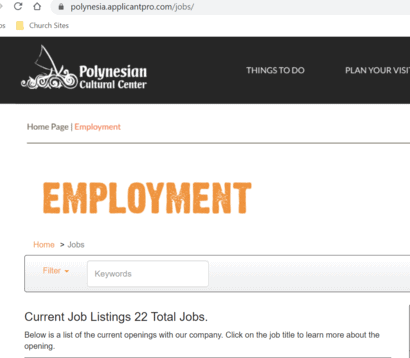 Upon receiving a message that a bomb has been planted at the Polynesian Cultural Center the following procedures apply:

If Suspicious Device is found: