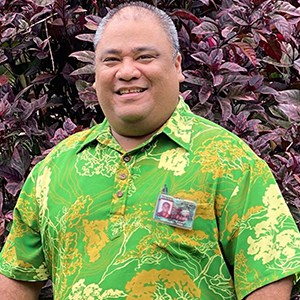 We are grateful to have an amazing employee like Pewa!

Learning to be a good problem solver and an agile decision maker takes time and experience. Our lives become a sum of the many roads we travel and experiences navigated in a quest to find the person we are meant to be. The journey begins when we are born. We may have to climb high mountains, swim in the ocean, and walk a rocky path until we find the one we’re looking for. Meet Pewa Kawa`akaulanaonamokupuni Dela Rosa, Performance manager for the Ali`i Luaus.

Pewa was born at the Castle Hospital in Kailua and attended Laie Elementary and graduated from Kahuku High School (once a Red Raider, always a Red Raider). He played the saxophone in the high school band and sang with the choir. The only sports he played were church sponsored.

Pewa was named by his Aunty Sally who wanted the Tahitian name, Piva. However, his mother, Ellen Gay Dela Rosa wanted a more Hawaiian sounding name and changed the spelling to Pewa. His middle name is for a famous canoe from across the island, Kawa`akaulanaonamokupuni. Because his mother was very involved in many aspects of the Polynesian Cultural Center, Pewa and his siblings basically grew up at the Center. He remembers playing in the villages and going home after the night show. Also, Pewa started dancing hula at age three. By the time he got to high school, he was tired of hula and the time it took away from other things he wanted to do. He decided to take a break which lasted until he graduated from high school.

After graduation, Pewa was accepted for college and at the same time was offered an opportunity to travel with the Promo Team. The choice between two good things is never easy. He chose travel and to this day Pewa describes his Promo Team experience as the “highlights of my life.” When traveling with the church Promo Team, there were opportunities to do missionary work. When they traveled overseas, they could spend anywhere from a few days to a few months in an area. The team was hired to do Polynesian review shows during the week and during their off time they did special Firesides and Family Home Evenings for groups.

One really memorable experience happened the second or third time the Promo Team traveled to China. For that trip Pewa was the team leader and in charge of the group. They were flown to an isolated place in China and two of the dancers got sick. The conditions of this trip were stressful, but he provided leadership that helped the team be successful under difficult conditions. Pewa learned to make decisions and changes quickly from this experience.

Pewa worked with the Promo Team for eight years before coming back to the Polynesian Cultural Center. The Promo Teams had been part of sales and marketing and Ray Magalei, former Sales and Marketing Director, had taken over the Theatre Department. Pewa arrived just as the new Ha: Breath of Life show debuted and became the night show supervisor in the Theatre Department.

There was a time as the night show supervisor when Pewa experienced a dark period in his life. When he finally told people about his depression, almost immediately three others responded that they were “going through the same thing.” Pewa believes the Lord allows you to “go through things” to learn to help others. “I have had so many reach out to me who don’t know how to handle school, stress, family and friends. Sharing experiences is helpful. I have learned to love my job more because I can connect on a different level with students.” The first thing Pewa did was to read the Book of Mormon in three weeks. The book provided comfort and a distraction from day-to-day life. Pewa also expressed an appreciation for the new Genuine Gold Advisor program initiated by the Center. He said, “It is the best thing the Center has enacted for the students ever.”

Pewa now has a better appreciation for hula and his heritage than he did as a young man. In a leadership position at the Center, he can now better appreciate why his teachers wanted things done right. “Hula is more than just motions.” He has four very well-known relatives that he can go to for help and advice if needed: Uncle Cy Bridges, Uncle Keith Awai, his mom, Ellen Gay and her sister Aunty Sunday Mariteragi.

Pewa recognizes that the Polynesian Cultural Center is a sacred place built on prophecy. Members of his Ohana sacrificed “all they had” to create this place. Family members came and made thatching for roofs and provided food for the Hukilau. He “loves the cultures of Polynesia and working with the kids. I like being part of something bigger than myself.”

Article #2:  7 Things to Know About Traffic on Oahu, Hawaii 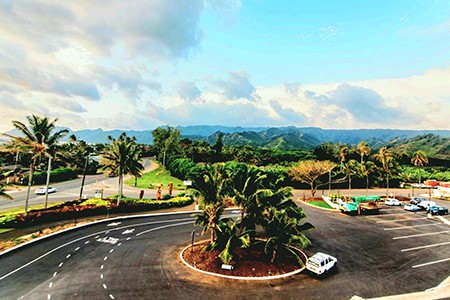 The Center uses traditional Polynesian techniques and recipes in innovative ways to bring unique dishes to our Ohana. A Hawaiian ground oven, or imu, is built in the early morning hours and used to steam a whole roasted pig for 10 hours. This tradition has been passed down for generations and is common for luaus.

Our Chefs also use a hot rock technique to cook traditional food, such as the Samoan recipe of fresh Kona Kampachi fish. These are just some of the ways the Polynesian Cultural Center strives to honor the long-standing traditions of Polynesian cooking. Click here to visit their website and learn more about Taste Polynesia!

Rain makes for slippery sidewalks and pathways, and a loss of friction coefficient of about 25%. Many people have slipped unexpectedly on wet surfaces both indoors and outdoors.

Take slooooow steps (and learn how to do the shuffle)

There’s no need to rush over slippery spots. Take slow, small steps whenever you need to walk across potential slip hazards. Slowing your steps down also means that you can use your feet as “probes” to detect just how slippery the surface in front of you is.

Always watch where you’re stepping before you actually take a step. If you’re walking slowly, your reaction time will be more responsive to changes in traction. If stepping is too dangerous, do the shuffle! Keep your feet on the ground (at least one foot apart) and just glide and dance your way across that spill. We wouldn’t recommend practicing your ice dance routine, though.

Bend your knees, and walk flat-footed

Life is all about balance, right? Well, the same is true for walking over slippery surfaces. You’re going to want to make sure that you are as centered and balanced as possible. While walking, slightly bend your knees and try to walk flat-footed as much as you can. This keeps your center of gravity over your feet to maintain that perfect balance. To help with this, point your feet slightly outward.

Remember, none of this has to be too drastic. We don’t want you squatting down like a crab and walking sideways with your feet pointed out. Just get your feet directly underneath you and keep them flat while taking (slow) steps.

Are slips common at your job? Then wear the proper footwear!

If you work in an environment where slips are a regular occurrence, then it’s important for you to have a pair of slip-resistant shoes on at all times. 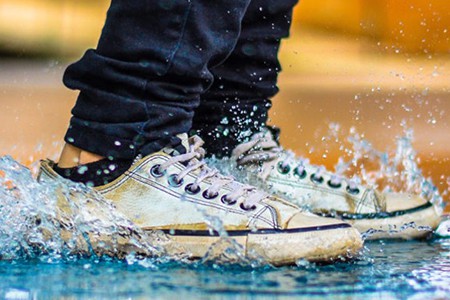