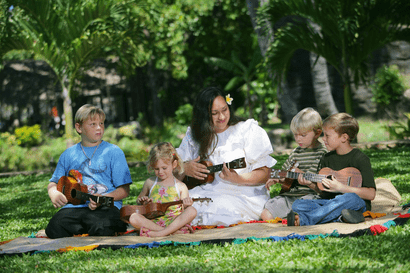 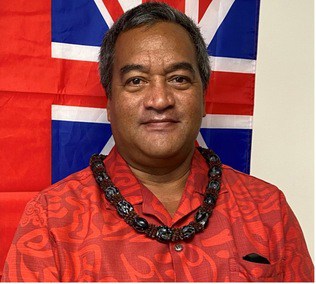 Lance Aina Is a fantastic employee!

I was a few minutes early for our scheduled interview time but was sure that our 1:00pm appointment would be kept. I was meeting a man who has an impeccable reputation as a responsible, kind, smart, and caring individual. Someone who quietly makes his presence felt and you know instinctively is competent and trustworthy. He showed up exactly on time and had his survey questions completed. Please meet Lanceford (Lance) Kealaka`i Aina, Manager of Guest Services Logistics and Support.

When the Polynesian Culture Center reopened after the COVID closure, Lance became the On-Site Coordinator; supervising Day Activities, ticket takers and assisted with the parking lot. With COVID restrictions in place, Lance oversaw the issuing of wristbands and checking vaccination cards and retains the job of tram tours to the temple visitor’s center. Recently, Lance became the security liaison for the Polynesian Cultural Center. He is also in charge of the Customer Service Team which oversees lost and found, guest rental of strollers, wheel chairs and scooters. He receives complaints and compliments and drives the tram bus when necessary.

Lance was born in Hilo on the Big Island of Hawaii. He grew up on the Hawaiian Homestead, Keaukaha and attended Hilo High School. After graduating from high school, Lance went to the University of Hawaii at Hilo until he was called to serve in the Phoenix Arizona Mission as an English-speaking missionary. However, because he looks Spanish, many people thought he could speak Spanish. When he couldn’t speak or understand the language, the people would often say, “You should know your language.” He would answer, “I’m not Spanish, I’m from Hawaii.”

After serving a mission, Lance came to school at BYU-Hawaii and majored in social work. He also worked in the Hawaii Village where he met his wife, Silina, who is Fijian Rotuman. Her Mom and Dad were one of the first Fijians to work at the Polynesian Cultural Center. After two years, Lance left the Hawaii Village to work as an usher in the Hawaiian Journey Theater and night show which were part of guest services at the time.

When the theater venue was moved to the theater department, Guides Manager Kim Naeole wanted Lance to stay in guest services and moved him to the tram tours.  Lance soon became supervisor over the tram and canoe tours.  Many exciting and innovative things were implemented with the trams and canoes at this time. “We sang Christmas Carols on the trams and offered Haunted Lagoon and Christmas canoe rides. Fun times.”

After graduating from BYU-Hawaii with a BSW (Bachelor of Social Work), the PCC offered Lance a full-time job. However, Lance wanted to work in the field he had just spent four years preparing for. While still working part time for PCC, Lance took a second job working with troubled youth for about a year. Then PCC offered Lance a full-time job at trams. He said, “This is my calling. Since 1997 I have worked the tram tours and seen many generations of missionaries work here. It has been great to help the sister missionaries and help guests understand the history of this place. The tram tour is a historical tour and if guests want more information, they can fill out a card. We get lots of feedback and stories about successes the young sisters never know about. There is one story about a couple who remembered seeing the name tags and when Elders came to their door with the same name tag, the missionaries were invited in. Later their kids came to BYU-Hawaii for school and were tour guides.”

The Polynesian Cultural Center has been, “my life for 25 years. I have been around to watch it grow. I’ve seen leaders come and go who I look up to and who I’ve learned so much from. Some have retired and some have passed away. I’ve learned a lot from them. I tell the students to learn as much as you can while you’re here because that’s what I’ve done. When I was a student, I thought, ‘yeah that’s just a bunch of old people trying to tell me what to do. I’m doing the work. I think you should do it this way.’ They don’t see the bigger picture. Now when I try to tell the students the same thing, I see that same look, ‘yeah I think I can do it this way and it’s better.’ Then later on they say ‘yeah, your way is better.’ It’s just because when you experience life you’ve seen how things work and don’t work. I just try to teach the students and let them roll with it. They’ll learn and pick up things. I like watching this.”

Over the years, Lance has seen some changes in student attitudes. As a supervisor, he used to have students push canoes for the full four years they were here. Now, students may stay one semester and move on to the next job. “It may be a generational trend where students learn all they can in one job and move to the next to learn new things. They are more outgoing and look for a new adventure to try something different.”

Lance enjoys working with the students and says that the best thing about his job is seeing the students graduate and move on. Some come to the Center having never worked before and are now in a position where they have to work. Some have never learned about their culture, danced or sang. Many will readily admit that working at the Center has helped them be able to talk to people.

Lance has been at the PCC through many leadership changes. Each president brings an individual focus and pursue different training styles. Lance has learned that he prefers being on the front lines and doesn’t like being in the office too much. The Villages are focusing more on cultural education and not just entertainment. The Polynesian Cultural Center is moving more toward education. Students are learning more about their culture and heritage and how all Polynesia is tied together. “We may be from different cultures but we are connected. The Ocean doesn’t separate us; it brings us together.  The Ocean is our highway!  Millions have come to see why this community called Lāʻie is so special. I love Lāʻie.” 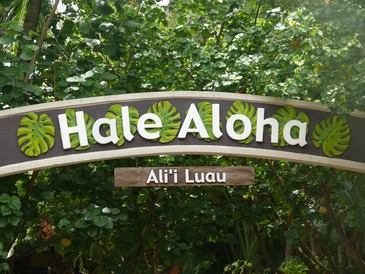 Every day before Hale Aloha opens for guest seating, an employee goes around and lights the Tiki torches. There is a process for torch lighting that saves time and is efficient. According to Greg Maples, “Last week, we were stressed because we were overbooked and late lighting the torches. We had started letting guests in for seating and I was standing by the hostess station when I noticed our employee, Tim, just starting to light the torches. As usual, he started lighting the three torches across the lagoon close to the imu. He had lit one and started across the bridge. I’m thinking, ‘What’s this kid doing. He needs to go back and light the other two before crossing the bridge. I said, “Hey Tim, you need to go back and light the other two torches before crossing the bridge.”  Tim answered, “Oh Greg, I know. I just need to light this one now.”

I’m thinking, “What a waste of time.” But I didn’t say anything.

Tim walked across the bridge and came past the hostess station where there was a torch pipe with two Tikis right next to the hostess station. As Tim went to light the torches, they snapped off and fell into his arms at that very moment. Had he not skipped those two torches by the imu and come to light the torch by the hostess station, the torches would have fallen right on a mother and daughter who were standing next to the hostess station. The gas pipes are solid iron with two gigantic Tikis at the top. Tim turned and looked at me because gas was spewing out of the top. I told him to turn the gas off and put the pipe away. We both learned a lesson that day. Had he not listened to the spirit, the pipe would have fallen right on top of a guest. I was worried about following the process, but Tim followed the spirit. I am so proud of Tim for following the prompting of the spirit that day.

The next miracle of that day happened because Hale Aloha was overbooked. There are 367 seats and reservations had booked 340 tickets. That is a problem because on any given night there are between 25 and 50 lap children. “Everyone was panicked because we weren’t sure what we were going to do if everyone who had tickets showed up. At the end of the night, we had exactly 367 seats full. Everyone with tickets had checked in and not one person was without a seat. This was our ‘loaves and fishes’ moment.”