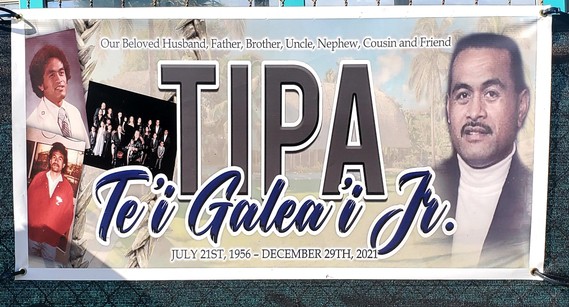 The Polynesian Cultural Center wishes to recognize and honor the life of  Te`i “Tipa” Galea`i Jr. through some of the many memories shared through social media, in personal visits to the family, and submitted for this article. Each one represents many more individuals who send their love and prayers. While we all feel deeply the pain of his departure, we are so grateful to have had his gentle presence in our lives. 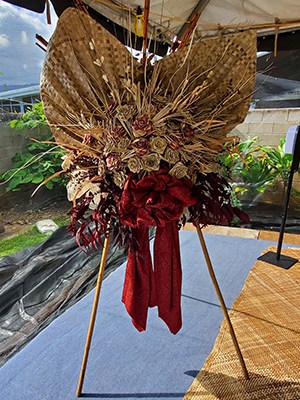 This beautiful wreath, made by Silina Aina, was presented to the Galea`i family from their PCC Ohana

My recollections of Tipa span two decades. He loved his basketball and worked as a musician as well as a performer in Tahiti, and a manager in Guest Services and the Samoan village.

I never recalled him ever needing to be the “star of the show” although he most certainly was on many occasions. Instead, I remember him being somewhat reserved, attentive, and considerate of his fellow workers, especially those who reported to him. He had a certain air of confidence about him that I believe made others feel comfortable and secure.

The smartest thing he ever did was marry Tali, and like all good wives, she helped mold him into the man we all knew and loved. A man prepared to meet his maker. 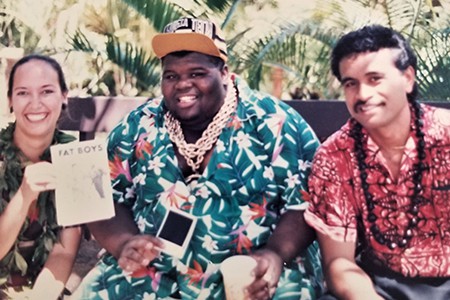 Back in the ’80s with Delsa Moe, Darren Robbinson from the rap group Fat Boys, and Tipa Galea`i

I first met Tipa as a missionary serving in Samoa and then I met up with him again at the Center when I came to attend BYUH. He was working in the Fiji Village then as a roofer rethatching the chief’s house in the morning, and as a dancer and musician in the afternoons for Fiji.

Later he was one of our musicians who would literally stroll around The Center to serenade guests in the late afternoon and after dinner as they were headed to the show. He was also a dancer, musician, and drummer in the canoe pageant and night show. He could easily play any instrument and learn any song in any language – that’s the Galea`i gift and he definitely used it well.

He eventually transferred to the Tahiti Village as a musician and drummer and learned to make coconut bread and po`e just as well as the Tahitians could. Even as the Samoa Village manager, many were shocked when Tipa would whip up these Tahitian foods to feed the employees on special occasions.

Tipa eventually became the manager for Guest Services and that’s where I noticed one of Tipa’s most valuable characteristics – his ability to remain calm and focused under all kinds of pressure. He was an expert in diffusing heated situations with guests or employees. He would listen without interrupting and allow them time to vent and then he would calmly ask “so what can I do to make you happy”? This question shocked so many people because they didn’t expect it and then they would be tongue-tied for a bit. Eventually, they calmed down and ended up remaining at or leaving the Center satisfied. 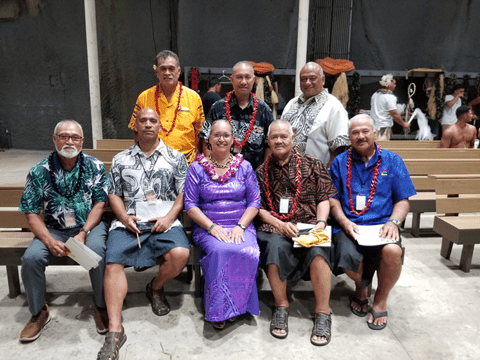 Tipa was a man of very few words but a lot of action or results. He was a jack-of-all-trades who could fix almost anything and did. He could anticipate things and because of that, he worked very well with Uncle David Hannemann and Logo Apelu on VIPs and Special Events, adjusting operations quickly and smoothly to accommodate their needs.  He was a founding member of the We Are Samoa Festival with key responsibilities over the event drummers and competitors. In later years when he became the manager for Samoa, Tipa and his village team would schedule a week of featured activities and food in Samoa to enhance the Samoan Festival. Everyone looked forward to the featured food of the day and we hope this tradition will continue in the village.

Under Tipa’s leadership, the guest satisfaction scores for Samoa reached 90% for the first time in the Center’s history. The Samoa village took on the challenge to be more self-sustaining by planting crops in any available spot around their village – behind the bathrooms along the service road, in the old spot where the Islands Office use to be, and in the planter where the big rubber tree used to be. The Samoa Village harvests their own crops to use in their daily demonstrations.

Tipa also traveled frequently with the Promo Team as a musician or drummer. He represented the Center multiple times as a fireknife judge in Samoa too.

Tipa was known for his signature tiare flower in the ear, his Samoan ula fala lei and for many years – his mustache. To say we will miss Tipa is a huge understatement. He was like a comfort blanket. Quiet, unassuming, low-key but very comforting to have around. If I saw Tipa in the village or at the We Are Samoa Festival, I was calm knowing he was there because it meant “all was well”. He has been a great friend and like families, I’m grateful friendships last forever too.

Ia manuia lau malaga Faleulatauaitu Tipa Galeai.  (Faleulatauaitu is his chiefly title from the village of Fitiuta on the Manu’a Islands) 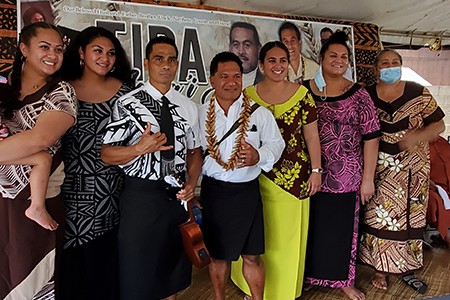 I’m still in disbelief that he is gone. One day he was fine, and then the next, he didn’t look good.

I have to say, I’ve never seen him upset or distraught because of some employees who don’t do what they’re supposed to be doing. Maybe the best way I could describe it is that he is very calm, cool, and collected. Never flies off the handle. Always seems to really know how to take care of challenges or problems when they arise at work, you know? He’s not a man of many words. Even sometimes when we would talk to him about certain employees, I would tell him “Tipa, you need to really just tell them! Don’t be afraid to correct them. But that’s not his nature. He’s very quiet but in that quiet, he’s also very effective and he’s able to gain the respect of those he works with – because of that demeanor that he has. That type of leadership is very hard to come by.

When he comes into our office, we talk about the work, but sometimes we talk about other things. And now I don’t see him anymore, and I know that’s what it’s going to be about for all of us. When things happen like this so sudden, it just feels so…..

But then, there is just so much to remember about Tipa. He was a great leader. He was very faithful to his work and to his family, and he had so much to look forward to.

He was not just a manager. I considered him a good friend. 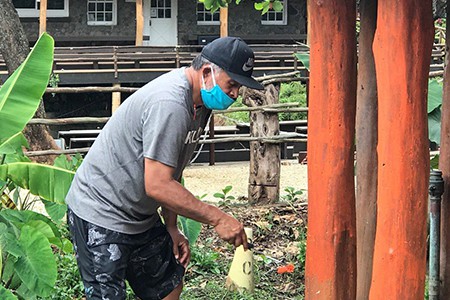 First of all, I want to express my sincere and deep condolences to Tali and the Galeai family. We are also saddened as well for the sudden loss of our dear beloved Chief. He was a great leader and an awesome mentor to all of us. He really, truly led by example. I am glad I had the opportunity to work closely with Tipa. I learned a lot from this great man.

Tipa is like a Nike. He just “do it”. I think he even came up with that Nike slogan. Just do it! Every time Tipa comes to work he works hard. He never asked for help. He never tells anybody what to do. He just does it himself, and for that, I am grateful for his example. He was very humble, very loving, and caring to all his employees, especially the students. He put together a lot of activities for us. He will be truly missed around the village. The legacy that he left behind will be hard to follow.

I am sure Heavenly Father is very proud and very happy his Nike boy has finally come home so that they can play golf together.

Creasepaul Tofa, Senior Cultural Ambassador, Samoan Village, from his presentation during the PCC Visit to the Galeai Family. 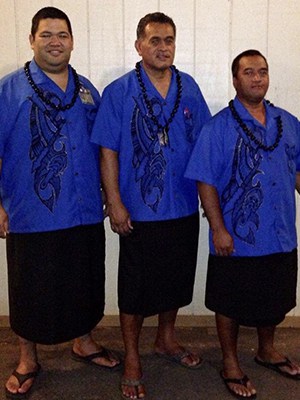 I was lucky enough to serve under [Tipa’s] leadership and learn so much from him. I was a young and fiapoko new leader who thought I knew what I was doing. Looking back, I see how stupid I was in so many things. Tipa taught me a better way to lead.

He led by example.

He led with humility.

He led with a genuine love for others.

I called him “boss” at PCC for more than 10 years. And he always called me “uso” or “brother” — something that always made me feel so important and valued.

It wasn’t nearly enough time for me to learn what I needed in order to live and serve like him, but I’m going to take what I was able to glean from him and do my very best.

Rest in Love, Boss. See you on the other side. 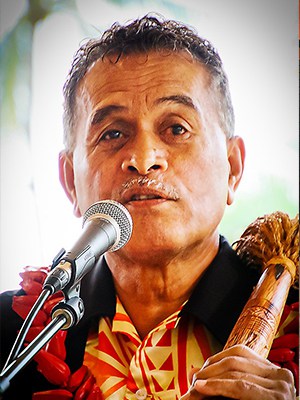 AUĒ for the passing of Tipa Galea’i, ae se’i tulou le faletua o Taliilagi Galea’i ma le ‘āiga ali’i i lo lātou māota fa’anoanoa. I was so surprised and saddened to see announcements earlier today (29 Dec 2021) on Facebook  . . . and yet, I also felt grateful for all the years we knew each other, for the many opportunities we shared working together at the Polynesian Cultural Center, and for our friendly ties as both back-door neighbors and fellow Laie 4th Ward members for many of those years. Tōfā mai feleni ma ia manuia lou ‘āiga se’ia toe feiloa’i outou i se taimi lumana’i atu i lugā.