Article #1: A Life Filled with Opportunity 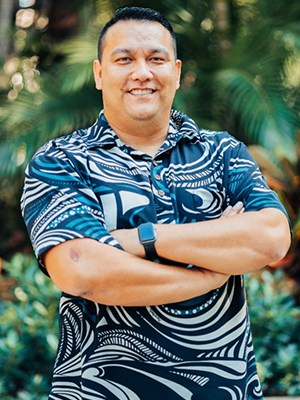 Kahili Soon has been an active part of the Hukilau Marketplace since 2015. Learn about what brought this hard-working, hard-playing team member here and how he has grown to appreciate his decision to become a member of Team PCC.

What’s the difference between working for a big national corporation and the Polynesian Cultural Center? Kahili Soon can tell you. It’s the people and the culture. Meet Kahiliaulani George Soon, Director of Operational Services in the Culinary Services Division of the PCC.

Kahiliaulani (Kahili) George Soon was born in Honolulu and attended Kamehameha High School. He grew up in Waikane, Hawaii, and would gladly live there again. He describes Waikane as “a beautiful and peaceful place with enough space for people to have privacy, but close enough to Kaneohe when you need to shop.”

Kahili was named after two grandfathers. “Kahiliaulani is a family name that is passed down with permission from someone with the same name.  I am named after my mom’s father who passed away the year I was born and George after my father’s dad who is from Nanakuli.”

In high school, Kahili was mainly into sports and friends although he got good grades in math and science. Throughout his elementary and high school years, volleyball was his sport. But he also liked football. With the idea of having no regrets, Kahili made the hardest decision of his life at that time. Volleyball and football are played during the same season. What did he do? He chose to play football in his senior year instead of a volleyball. He would have always wondered if he hadn’t taken the chance to play receiver on his high school football team.

As a step to further personal growth and to prepare for a mission, Kahili decided to attend BYU-Provo after high school, where he was able to spread his youthful wings. Also, he had siblings who had attended BYU-Provo so he was familiar with the area where he could enjoy both skiing and snowboarding. He enrolled at BYU-Provo with a major in Geography with an emphasis in Travel and Tourism and a minor in Business Management. When he was called to serve the Lord, it was in Pocatello, Idaho. Was that a WOW! Or an OH mission? Turns out that the mission was a WOW mission. Even though 90% of the local population were members of the Church, they were super helpful in furthering the work. Also, the skinny kid who started the mission had bulked up quite a bit by the end.

While still attending BYU-Provo following his mission, Kahili worked security at the Missionary Training Center in Provo. After graduation, he was promoted to Security Supervisor. He said, “It was such a great experience to be a part of such a spiritual environment. I was able to meet with almost every apostle and President Monson.”

Before coming to the Polynesian Cultural Center Kahili was working in Torrance, California for the Marriot Corporation as a Front Office Manager. The move back to Hawaii to be closer to his family was supposed to be temporary. “I always thought I’d go back to hotel management.” When he took the job at the Hukilau Marketplace as the Tenant Services Supervisor he thought he was taking a “step down.” Turns out it was a “step up.” He loves the PCC. “The culture here is different than any other place and you get Sundays off. In the hotel business, there are no days off.” The flexibility and the great spirit of the people made him want to stay. Since he first started in 2015, he has continued moving up. He was promoted to Senior Manager at the Hukilau Marketplace under Greg Maples. When Greg was made the Vice President of Culinary Services, he brought Kahili with him. Kahili has served as the Director of Operational Services in the Culinary Services Division since May 2021. As the Director he is over Pounders and any Concessions. He manages the digital Food Safety program called JOLT. He is slated to be in charge of the new Food Management System called LS retail when it goes “live”. While he was a supervisor in the Marketplace, he was responsible for all PCC signage and will continue that responsibility for Culinary Services.

“People at the PCC are unique and make this place so much different and so much better than other places in the corporate world. It doesn’t matter about the process here because the people make the work so much better and bring the spirit. The guests feel it, you can see it in their faces. The PCC has the best cultural beliefs which are the foundation of any company. The moto I have adopted from Greg is “We are here to do what is right, not be right.’” 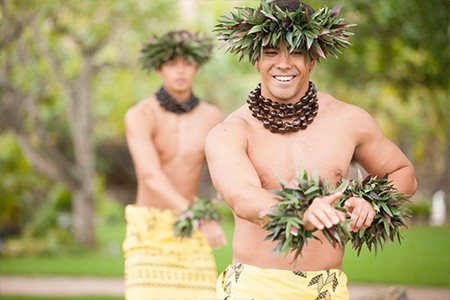 Our Hawaiian phrase of the week is “ʻAʻohe hana nui ke alu ʻia” meaning No task is too big when done together by all. This phrase is an ʻŌlelo Noʻeau (wise saying) reminding us that when we work together we can overcome big things, and is better and more productive than working alone.  He lā maikaʻi kākou.