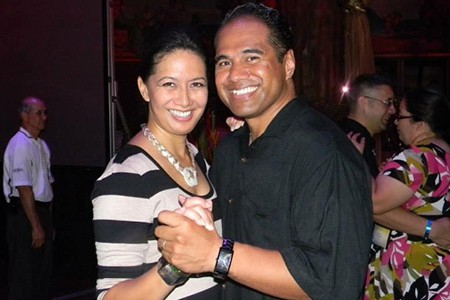 Wanted: Someone with boundless energy and ideas. Not afraid to be the first on a new project. Understand the value of competition and competitive marketing. Understand the value of the Polynesian Cultural Center and the ability to convince the world that everyone needs a PCC experience. Ability to recognize the potential, energy, and talent students bring to the PCC and willing to build on that strength to develop the leaders of tomorrow. Experience working at the PCC as a student in a variety of positions and most importantly a former PCC dancer. Please meet Ray Magalei, who for 20 years worked with the Polynesian Cultural Center marketing department and is the current Senior Director for the Theatre Department.

Ray started out as a local boy born at the Kahuku hospital. He attended La`ie Elementary School for his early grades. Then his family moved to American Samoa where he attended Pavaiai Elementary and Intermediate School for 6th through 8th grades. When his family moved back to La`ie, Ray was a freshman at Kahuku High School and started his first job at the Polynesian Cultural Center bussing tables at the Gateway Restaurant. He made his mark in high school as the editor of the school’s newsletter.

After graduating from high school Ray attended BYU-Hawaii for one year. He was then called to serve in the California Arcadia Mission, which includes Burbank, Pasadena, and North Hollywood. Upon returning to BYU-Hawaii, Ray was interested in marketing and advertising but majored in International Business. At that time, majoring in business was the only way to take classes focusing on advertising and marketing.

With a new degree in hand, he and his wife Shonna moved to San Mateo, California in the San Francisco Bay Area. Ray took a job with the Enterprise Rent-A-Car management training program and Shonna was a flight attendant with United Airlines based in San Francisco.

With the birth of their first child, the Magalei’s moved home to Hawai`i. For about six months, Ray worked in sales for an import/export group based in Honolulu. During those months, Ray renewed contact with everyone he knew at the Polynesian Cultural Center. 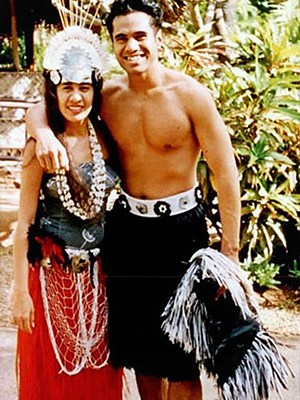 Ray performed early on for the Tahiti Village

While a student at BYU-Hawaii Ray worked as a Canoe Guide and a Multi-Purpose Guide for one year. His first job at PCC after his mission was with Reservations in the student box office. Some friends were dancers and made the job sound fun, so Ray applied and became a dancer. He admired the dancers because they took pride in their performance and it looked like everyone was striving for excellence and discipline. He was motivated to learn the dances quickly because he was “determined to get on stage as fast as he could.” He was always asking others to help him learn. He worked 20 hours a week in Reservations,10 hours a week dancing in the Tahiti Village, and the night show. Then, he became a member of the PCC Promo Team Traveling Squad which traveled the world presenting various island cultures and promoting the Polynesian Cultural Center. When not performing, the dancers normally rest, go to the weight room, or go shopping. However, Ray asked permission to go with the sales managers to the Expo and work on the trading floor. He would don an aloha shirt and a nice pair of slacks and mingle with travel agencies and wholesalers talking and passing out pamphlets. 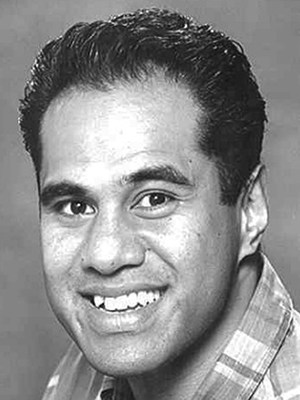 From early on, Ray Magalei knew that Marketing was his future and worked hard to achieve his goals

Working on the sales floor as a student was where Ray learned to love the travel industry and gained knowledge and an appreciation for the Polynesian Cultural Center.

The contacts made as a student paid off when his young family returned to Hawai`i after working on the mainland. When there was an opening at the PCC as a Marketing Assistant, Ray applied and was referred to the Vice President of Marketing, Dave Cole. Ray was called to Dave’s office for an interview and was hired on the spot. Ray said, “Dave Cole was a great mentor and we are still friends today. He taught me so much.” Ray was now on the other side of marketing. He had seen the business as a dancer on the Promo Team and had met many leaders in the travel industry. Now his job was to get those same people to sign contracts with the PCC. He was able to position the Promo Team and PCC in front of audiences where they had never been before. 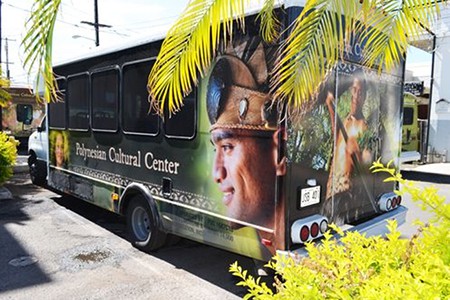 One of our many bus wraps traveling across Oahu

Under Ray’s leadership, PCC was the first to wrap buses and trams, supply hotels with monitors to run the PCC DVD all day. In sales offices without a TV monitor, they wrapped the entire room in PCC graphics. The marketing team also worked with airlines to promote the Center within their advertising. He made sure that the PCC was a strong presence everywhere. Impressed by his innovation and hard work, President Grace said, “Ray, I’d like you to help on the operations side.” So, after 20 years in marketing Ray found himself in the theatre. Interestingly enough, Ray’s all-time favorite job was as a Polynesian Cultural Center dancer. He was now able to bring his talent and experience to the Evening Show. He has a firm belief that the HĀ: Breath of Life is the best Polynesian show in the world and their outstanding cast brings a quality of professionalism “equivalent to anything you will see on Broadway.” 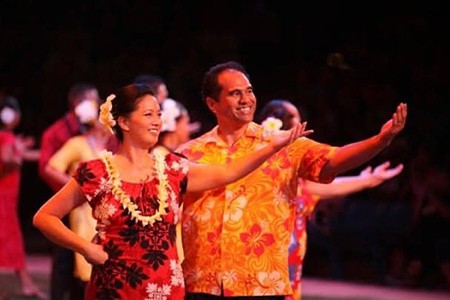 All this, and he performs too!

The COVID months were hard. Workers who were still here were able to do a lot of cleaning and streamlining of processes to focus on current operations. The cast of HĀ was reduced by 20 dancers a night. Because the pool of performers was greatly reduced during the shutdown, former dancers were brought back to fill dance positions and were cross-trained in the various sets so that the stage was still full of dancers while working with fewer total dancers. Performers who would normally dance 2-3 sets now dance 4-5 sets. The configuration seems to work well and is still the model currently in place. 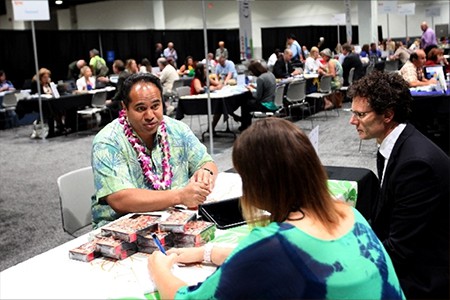 Ray feels blessed to work with a group of dancers that are committed to making “this work and put forth their very best effort every day. This is a special place built by special people to fulfill David O. McKay’s prophecy. There is a brotherhood and love here and I am proud to be a member of the Polynesian Cultural Center team. I have a special feeling for the students.  I hope to help develop the leaders of tomorrow. I recognize their energy and talent and hope to do my part to help them uncover talents they didn’t know they had. That’s what the Center did for me.”

Article #2: PCC Alum is now King of the Lions! 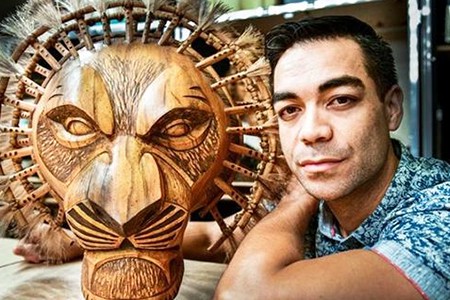 Gerald shares an up-close look at the beautiful mask representing Mufasa in the Broadway show: The Lion King. Photo courtesy of Samoa News

We love to hear about the success of our PCC `Ohana as they spread their wings and talent across the world. Here is a great story about Gerald Ramsey, a past performer from the Polynesian Cultural Center, who now fills the role of Mufasa in the traveling company for The Lion King. We hope you enjoy this inspiring article. We sure did! 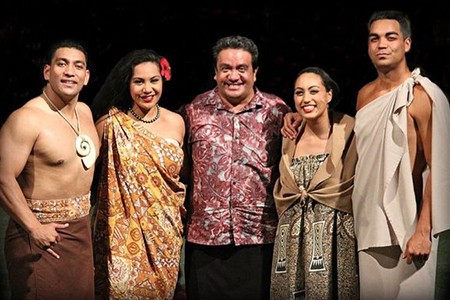 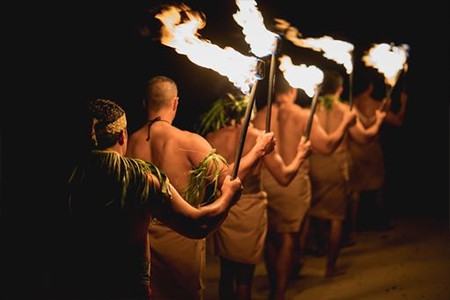 We are delighted to share the first of many blogs researched and submitted by students attending our adjacent university. They will cover a number of subjects focusing on Polynesian Culture, local tips, and practical experiences working for the Center. We just know you’ll enjoy them as much as we have!

First in our series is a cautionary overview of local myths everyone needs to pay attention to, prepared by our own Katie Almazan. 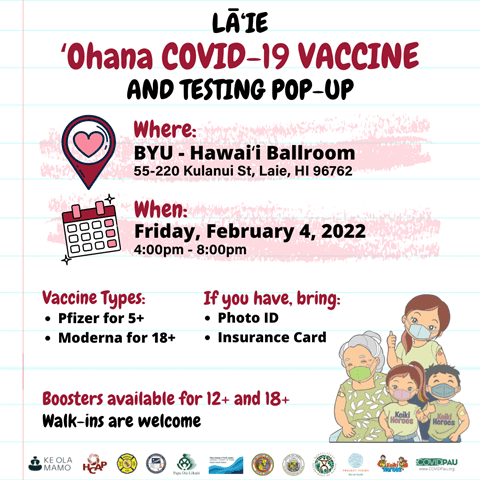