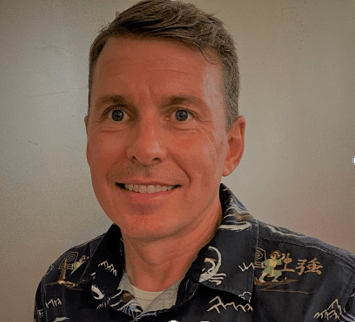 When Bret Grow, his wife, and one-year-old son came to BYU-H as students, they lived on the beach in a school bus. They had waited 8 months after Bret graduated from Ricks College with an Associate’s degree in general education to hear whether or not they were accepted at BYU-H. Upon arriving in Laie the only housing they could find was a school bus on the beach across the Kam highway across from the Polynesian Cultural Center. The bus was equipped with a bed, a table, open windows and they had to borrow the bathroom in the nearby house. Their intent was to spend the semester on the school bus while waiting for an apartment to open up at TVA. Fortunately, after a visit from their Bishop, an apartment opened up one week later. They had running water. Their romance with beach living was officially over.

Bret Grow, Director of Digital Marketing and Digital Commerce, was born and raised in Oceanside, California. He attended San Deguido High School where he played drums in the marching band. Even though he liked math and writing, spending time with friends, riding bikes, and visiting the beach were priorities. After high school, Bret worked at a pizza place to save money for a mission. The mission call to Chicago came when he turned 19. Chicago was a tough place to serve a mission. He returned home in 1995 to learn that his father had been diagnosed with early-onset Alzheimer’s. Then in 1996, while attending a church function, he met his future wife, Kate. After dating for two weeks, they became engaged and eight weeks later they were married. It was while attending Ricks College and started working for L Gene’s TV & Appliances that he first got into computers. The company would buy the parts and Bret would build computers for resale.

After leaving Ricks college Bret worked for a company in Arizona using his computer skills to design trusses for buildings. The owner of the company offered him $36,000 a year to stay with that company and not go on to college. After much prayer, the family decided to continue education was important. When Bret and his family were accepted at BYU-H and moved to Laie, the school bus adventure began.

Bret started at BYU-H with a major in information systems and an emphasis in computer networking. While a student, Bret had a job as a lifeguard for a surfing class which Bret describes as “fantastic”. Then he moved on to a job with Leigh Cummings as part of the CTG (Computer Technology Group) assigned to the help desk providing computer assistance to professors and students. After graduation, his experience with CTE led to a job as a web designer. Web development and graphic design were very new technologies at the time. Bret loved building something in one place that the whole world could use.

With a background in technology he soon discovered marketing is all about technology. It was when serving an internship building websites with Networks, Inc. (which turned into a full-time job) that the family moved to Aiea beach and had air conditioning for the first time. Then 9/11 happened. The family decided it was time to move back to the mainland. They were stunned when both Bret and Kate got the impression that Utah was where they needed to go. During their time on the mainland, Bret continued to work and learn, and eventually, he and a friend built their own company which he sold after 18 years of doing business. In retrospect, Bret isn’t sure he would do it again. He needed a business degree. The ups and downs of running a business with a tech degree proved to be challenging.

In 2019 the family again moved to Laie and bought a house across from the Center. Bret decided he wanted to do something with more meaning in life.

At 3:00 pm on a Friday afternoon, Bret walked to the Center. The offices were mostly vacant but fortunately, Eric Workman was still there. Bret had found the position of Director of Digital Marketing on the electronic job board and knew that was his job. The rest is history.

The three words Bret used to describe himself are- trying, dedicated, and persevere. Bret loves the people he works with who care about each other and the students.  He loves the mission of the Center. Students are being prepared for the future. He hopes to build a tighter relationship with BYU-H to continue the internship program Polynesian Cultural Center started this year. The twelve BYU-H student interns have doubled the size of the department and proved to be a valuable asset to marketing. They are learning marketing plus leadership plus business. AWESOME!

Sister Missionaries going above and beyond!

Meet Sis. Tonga (left) and Sis. Kisepi (right) who are frequently assigned to give tours on the PCC trams as part of their mission at the Hawaii Temple Visitor’s Center. Both missionaries are from Tonga and they were called to serve here for 18 months.

If you think you’ve seen them around Laie for a while now and that they should be nearing the end of their missions, you are half right. Sis Kisepi has been a missionary now for 29 months and Sis Tonga for 31 months! But they have no clue when their mission will be ending because Tonga’s borders are still closed, preventing them from returning home. And so they continue to serve as missionaries, for almost twice the length of their initial call. Both sisters have beautiful voices and enjoy singing for others as a way to share their message of Christ’s love for all.

So the next time you see them, say “malo ‘aupito” for their long service and remember that you are witnessing history in the making.

Sending Aloha and Prayers to the Kaaialii Family

For several years now, the Polynesian Cultural Center has been blessed by the talented musical group, Melelani. Sadly, Kalani Kaaialii who was formerly the lead guitarist, vocalist, MC, and father of the group, has passed on. Many of us were blessed to rub shoulders with Kalani and partake of his kindness and sweet spirit. Please keep the Kaaialii family in your thoughts and prayers at this time, and feel free to send your condolences. 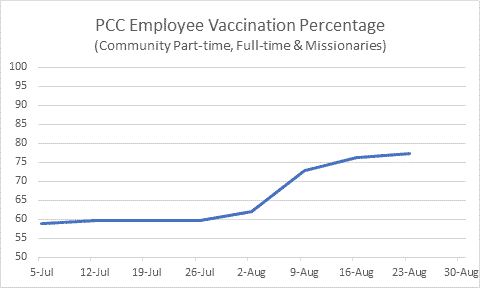 It’s good for employees to know what to do in the event of a fire accident at the workplace. Safety meetings present a chance to cover topics such as how to minimize the effects of fire, prevent the fire from spreading, and save lives. It’s also good for the workers to know:

Accidents caused by electricity can often be fatal. Knowing how to be careful with electrical equipment and devices at work is of the utmost importance. It’s vital for any safety meeting to discuss the consequences of not wearing proper protective gear while working with electrical wires or being careless around them. 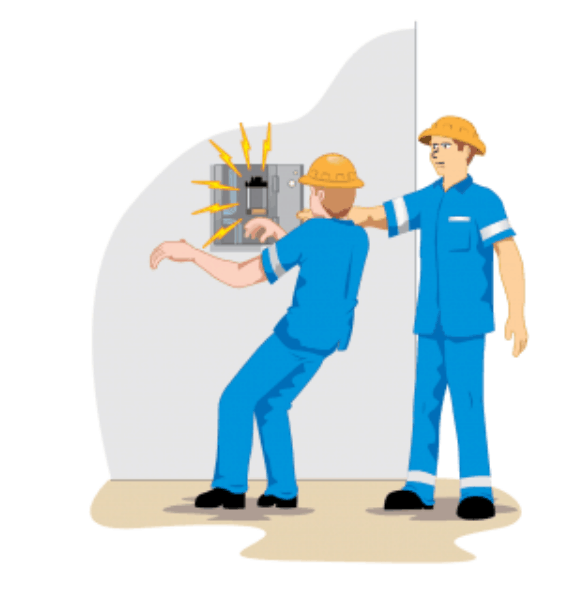