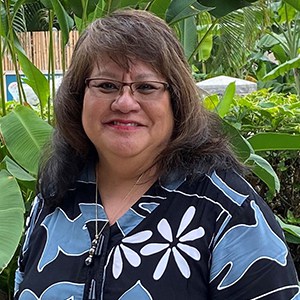 Kim Kaimana is an amazing employee!

“I love my job. I love being part of making it happen. And, I love being a part of helping people create memories that not only last 5-10 years, but memories that last a lifetime. I love it when people say, ‘Hey, I remember you.’” It is easy to understand why she is a Polynesian Cultural Center treasure. Her enthusiasm is infectious. Her work ethic is admirable. She has come up through the ranks, starting as a dancer and transferring to sales when the time was right. Meet Kim Georgette Holu Kaimana Account Executive/Office Administrator for the Waikiki Sales Office and a Polynesian Cultural Center employee for 35 years.

Kim Kaimana was born in Honolulu and attended school in Kailua where she grew up and currently resides. She loves the view of Mt. Olomana. As the youngest of four girls, Kim carries her father’s legacy with her middle name. His name is George, her middle name is Georgette and she is proud to say she has “many traits just like my dad.”

While in high school, Kim was involved in the Junior Achievement program where she got her first experience with production and sales. At the time, she didn’t realize the project making and selling kukui nut leis would eventually lead her to the Sales Team at the Polynesian Cultural Center. Making and selling leis, for which they made a profit, wasn’t Kim’s only high school activity. She was dancing professionally while a senior in high school for Billy Gonsalves and The Paradise Serenaders. However, finishing high school was important to her and to her parents. She finally achieved her goal and graduated from Kailua High School in 1977. After graduation, Kim worked for the First Insurance Company in the Claims Department and continued to dance professionally in Waikiki on the weekends.

In 1979 Disney World came to town looking for dancers for their company. Kim was ready for a new adventure. She was hired and moved to Florida along with seven other dancers and musicians. Turns out, one of the musicians, Klyde Kaimana, had graduated from her same high school in Kailua but their paths never crossed because Kim is a year older than Klyde. “At the time we were dating, we also found out that our dads worked for the same company and we grew up a block and a half away from each other.” The world got even smaller when they discovered that Klyde lived two houses away from her aunty and uncle. The young couple got married two years later and continued with Disney for another four and a half years before deciding it was time to come home to Hawaii.

Kim’s first job with the PCC was as an on-call promo team dancer. She danced in the place of someone going on maternity leave, who then decided not to come back. Kim quickly went from on-call to part-time dancer, then to lead, then to supervisor and finally to team manager. At that time there were two promo teams, one located in Waikiki and the other in Laie. Kim managed the Waikiki team. As manager she was expected to do everything. At that time teams of dancers and musicians performed in five different locations, all at the same time. Kim was responsible for the dancing, music and scheduling at each location and making sure everything went smoothly. Kim stayed with the promo team for 10 years before she was offered a job in Sales. She initially said, “no.” The dancers and musicians were in the industry performing for various shows and some were young. She felt very protective. However, it was a time when the Polynesian Cultural Center was making some changes and Kim was told that it would be in her best interest to take the sales job because the Center was only going to sponsor one promo team. Kim transferred and started as Assistant to the Sales Team. She was then promoted to Sales and is now the Account Executive/Office Administrator for the PCC Waikiki Sales Office. Her market area for sales is all of the USA, Canada, Australia, New Zealand, Europe, School Groups and MCI Accounts. I think she has the energy to do it. She describes herself as passionate, instrumental and determined.

Kim said, “I know many who have worked here and moved on. Most regret that decision. I’m lucky to be one of the few people who are able to do what they love.” She credits her success in life to her parents’ example. Her dad always said, “Why do something the easy way or with inferior supplies when you’ll just have to do it over again?” She heard her dad say many times, “If you’re going to do something, do it right.” 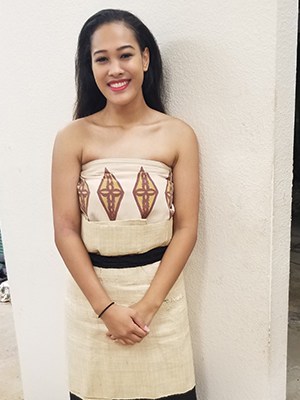 Ofa, we will miss you!

On April 18th, one of our talented and beautiful night show performers, Ofa Niu, will be reporting to the Utah Provo Mission. She will be serving in the English language but will take with her the mana and aloha of Polynesia.

If her work at the Polynesian Cultural Center says anything about her, she will be an amazing missionary. She’s ready! 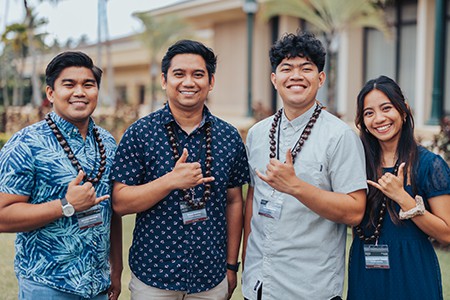 The annual Empower Your Dreams Competition is the biggest entrepreneurship competition held at BYU-Hawaii. Students with potential or current businesses enter in hopes of winning $5,000 to help launch or grow their ideas. Competition is tough and it is a long process consisting of 3 rounds. Only 5 teams are chosen to move on to the final round where the winner is announced.

This year, we are proud to announce that the first-place winning team is a group of talented professionals straight from our marketing department! The team consisted of Ephraim Tacuban, Shazer Llanera, Harold Pedroso, and Karizza Llanera. Their now award-winning business is a digital marketing agency called Convrsion Marketing!

Keep an eye out for a blog about the event coming out soon! 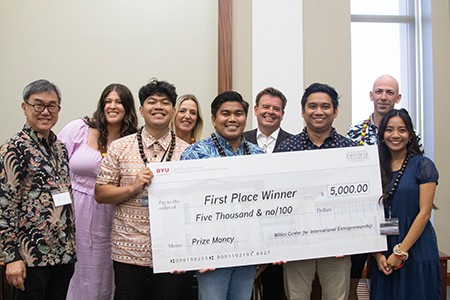 The grand prize of the competition