Remembering Pulefano Galea’i: A mentor to many, a friend to all

Remembering Pulefano Galea’i: A mentor to many, a friend to all 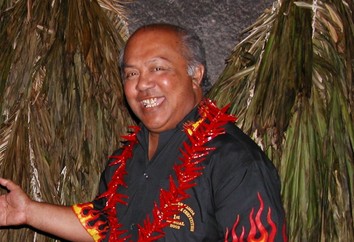 The Polynesian Cultural Center wishes to recognize the passing of one of their own, Pulefano Galea’i, founder of the World Fireknife Competition, on June 5, 2021.

Alfred Grace, President and CEO of the Polynesian Cultural Center stated “I have often shared with our Ohana that “we drink from wells we have not dug”. Pulefano Galeai is an excellent example of a man who “dug deep and tirelessly” to provide for future generations. He worked for the Center for 24 years, but even before, and long after his retirement, his influence and humble service was felt. We will always remember him as a man of great faith who shared his love and talents not only locally, but throughout the world. His generous spirit and joy of life will continue to influence others for years to come. Tofa my feleni. 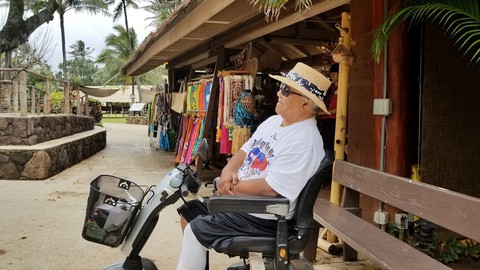 Delsa Moe, Vice President of Cultural Presentation, expressed her admiration. “Pule did anything asked of him and more. No job was beneath him if it meant helping the Center. Working with Pule you could always count on lots of laughter, and a few tears too. He was extremely talented, very creative and also very knowledgeable of Polynesian culture, language and especially music.”

“He loved entertaining and teaching,” she continued. “One thing he was passionate about was to ensure that fireknife dancers knew the origin and history of the siva ailao afi in order to prevent it from drifting into just a fire baton routine. He would often tell the competitors “You are not a true knife dancer if you don’t know the history and traditional basic moves of the ailao afi.”

“We were fortunate to have Pule spend a few moments with the young warriors before this year’s competition to encourage them to dance like warriors and not to fear the moment.”

“Although he’ll long be credited as the founder of the World Fireknife Championships, he was much more than that. He was a friend to everyone, with a heart bigger than his body. He would over-commit himself because he wanted to help anyone who asked for his help, much to the chagrin of his co-workers and family. He loved his family, his community, his ward and boy did he love his food. He knew every place in Honolulu that had good food.  If there’s anything I’ve learned from my buddy Pule over the years, it’s tenacity. Nothing was too difficult for him. Even when his leg was amputated, it didn’t slow him down one bit. It only motivated him to face his physical challenges head-on and that he did, because he was a warrior and warriors never give up. I will certainly miss him.” 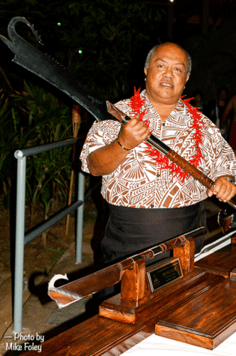 “Pule and I came back to work at the Polynesian Cultural Center at about the same time,” shared long-time friend and colleague Mikaele Foley. “I enjoyed working with him and am so grateful for our friendship, which goes back over 50 years. He never ceased to amaze me with his talent. He could conduct a meeting or event at a moment’s notice. His ability to ad lib, which came from his many years of performing, was incredible.”

“He was a people’s person” Steve Laulu, Island Manager at the Center stated. “He reminded me of what Maya Angelo, a poet, author and civil activist said, “People don’t remember what you did. People don’t remember what you said. But they remember how you made them feel” That is who Pulefano was. He always made others feel good about themselves in his actions, talents and deeds. He lifted others and helped them to be better.”

Raymond Mokiao, Planning and Projects Administrator and Master Carver, remembers him as “an Innovator who saw opportunities which brought fame and fortune to the PCC. As a previous Islands Director, he initiated the ukulele lessons activity in the Hawaii Mission Settlement, was the brainchild for the World Fire Knife Competition, and inspired the Nifo Oti trophies among many initiatives which still in today. He was a teacher, leader and a friend. His Polynesian spirit and contributions to the PCC will be remembered for generations.” 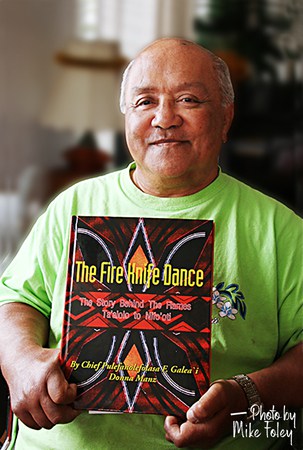 With all of the outstanding accomplishments and dedicated service he performed, perhaps it’s best to let him tell his own story. The following is from the section “About the Author” from his 2015 Book, “The Fireknife Dance: The Story Behind the Flames Ta’alolo to Nifo’oti”.

Pulefano F.L. Galeai was born on April 4, 1945 in the village of Mapusaga (peaceful) American Samoa. Pulefano learned and acquired all his cultural background including the ailao (twirl) from his father and grandfather. In 1954 Pulefano arrived in Hawaii and lived in a small Mormon community on the north shore of Oahu in Laie. At age nine Pulefano volunteered to work for the Hukilau Luau alongside his parents (a native Hawaiian feast), in cooking, ceremony, dancing, singing and performing the traditional knife dance. Pulefano [learned] all he could from his father [and then shared those talents as he] taught and instructed many others. 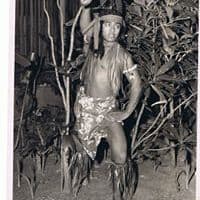 Pulefano as a young performer

In 1959, the Hilton Hawaiian Village Tapa-Room Director of Entertainment, Mr. Glenn Hughes and his wife visited Pulefano’s father’s searching for new talent. His father prompted him to do his best with the knife dance. It was the first time Pulefano danced with fire, not knowing what would be the outcome. [He] went with the Hughes to Waikiki to become the youngest fire knife dancer in the world as the billing indicated. Pulefano’s career had just begun, his eyes had never seen the glamour of show biz. Within six months he and his brother were hired by almost every major hotel that had a Polynesian production in Waikiki.

Pulefano attended the Church College of Hawaii for a couple of semesters but his career as a knife dancer demanded his full attention. He worked for the Hawaiian Eye and Follow the Sun series and [was] a regular on Lucky Luck’s world televised Luau. He later went to Hollywood to work for 20th Century Fox Film Corporation to dance and act in various series, then the CBS Ed Sullivan Show, Hollywood Bowl with the Polynesian Cultural Center, with Hawaii Governor Ariyoshi and PCC in the signing of the Sister State Agreement with Okinawa, and twice to the Lord Mayor’s Command Performance in Australia. He was invited twice to perform for the festivals of the Pacific Arts in Australia and New Zealand, assisted in the Flaming Sword Competition in American Samoa, and performed twice through the USO Program in overseas shows to Canton, Midway and Johnston Islands. He also worked as a travel and insurance consultant in Connecticut and Massachusetts. 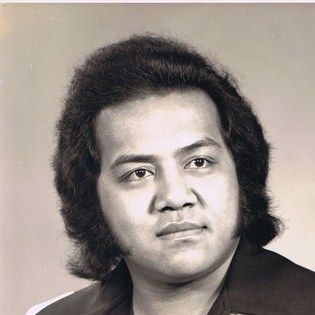 Even in his younger years, Pulefano was accomplishing so much

Pulefano won his first Fireknife World title in 1964 in Hawaii and placed second in the American Samoa Intercontinental Competition by the Office of Tourism. Following his return to Hawaii he founded the World Fireknife Championship here in Laie in 1993, the Kaua’i Poly Festival Fireknife Competition, helped organize the American Samoa Flaming Sword Competition, the Anaheim Flaming Sword Competition, the Fireknife Competition of Maui and more recently, the 2014 World Fireknife Tournament of the Champions, “Ua Pa le Lagi” (Explosion from Heaven) in Waikiki with Papali’itele, Seiuli, To’oa and the lady who pulled it altogether, Cha Thompson, from Tihati’s Production.

Also in Hawaii, Pulefano organized and directed the Samoan Idol competition, Senior Citizen’s Got Talent, and was the chairman of the Samoa Mo Samoa Tupulaga Festival, the We Are Samoa Festival, a community consultant to Dr. Posiulai, Tina’s Alamai Conference UH, recipient of the first Star of Oceania award from UH, the Na Makua Award by Dr. Ishmael Stagner and the Lifetime Treasure award by the Polynesian Cultural Center. Pulefano has provided translation work for court cases and was a member of the Civil Air Patrol at Weaver Base, Hawaii.

In accordance with Pulefano, all the things he has learned and acquired is through the divine guidance and love of his Heavenly Father. Pulefano has kept the faith and has built the Lord’s Kingdom even through all his travel and contracts.

Pulefano served twelve years in various bishoprics and eight years as a high counselor, among many others callings. He was also a Life Scout recipient and served many years as a Scout Master.

Clearly, Pulefano has been a powerhouse and mentor, and we have all been blessed through his outstanding talent and generous heart. We send our alofa to the Galea’i family, his devoted wife Sa and children Christopher, Tamaalii, Alexander, Pulefano Jr (deceased), Maliana, Tagimalie, and Peninatautele along with the many grandchildren, nieces and nephews, and cousins branching out from this powerful and giving family tree. You have our prayers, our support, and our hearts.