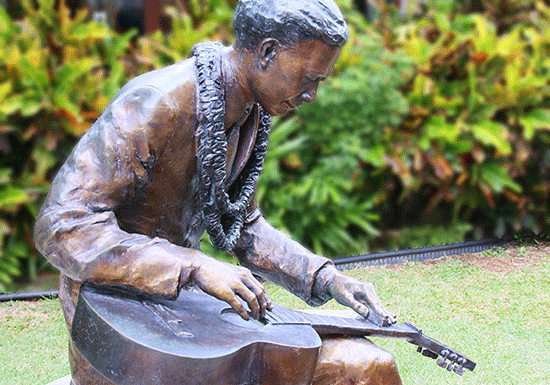 The statue of Joseph Kekuku, “father” of the Hawaiian steel guitar, at the Polynesian Cultural Center. (Photo by Mike Foley)

The Polynesian Cultural Center has a unique connection to the Hawaiian steel guitar: Its inventor was born in Laie, home of the PCC, in 1874. 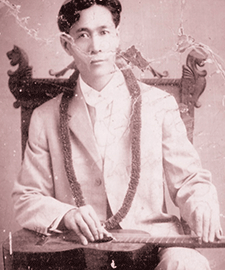 Young Joseph Kekukuupenaokamehamehakanaiaupuni Apuakehau, who shortened his stage name to Kekuku, invented the steel guitar in 1885. It is sometimes said he laid a guitar across his lap and moved the back of metal comb across the frets to create the first distinctive Hawaiian steel guitar sounds. Almost 140 years later, most players now use a steel bar about three inches long to create the steel guitar’s beautiful sliding sounds.

Kekuku left Hawaii in 1905. Over the next several decades, he and his Hawaiian band toured the U.S. mainland and also spent eight years playing in Europe. Returning to the U.S., he operated a popular music store in Chicago and eventually settled in New Jersey. He died there in 1932, having never returned to Hawaii. That was about the time musicians electrified the steel guitar, and took its popularity to new heights.

The Steel Guitar Hall of Fame inducted the “father” of the famed instrument in 1993. By that time the musical capabilities of the steel guitar had extended well beyond Hawaiian into country-western, blues and rock genres.

About two years ago, as part of opening the Polynesian Cultural Center’s new Hukilau Marketplace, the PCC erected a statue of Kekuku outside the Ukulele Experience in the Mahinalani Shop. 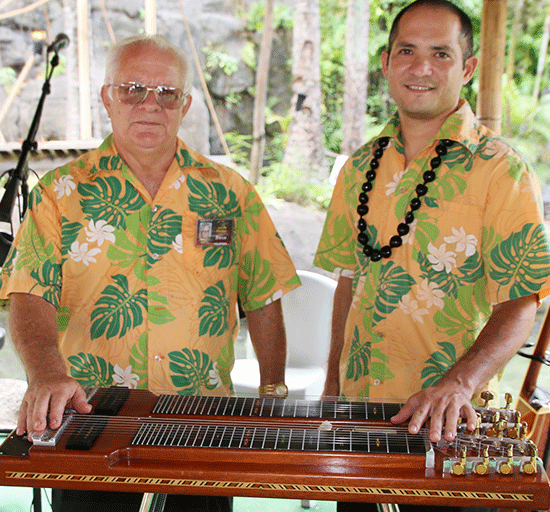 Steve Cheney (left) and his son, Ben, with one of the steel guitars he made, in the Hale Aloha at the Polynesian Cultural Center. (Photo by Mike Foley)

“When the Kekuku statue was unveiled, the Center mentioned we wanted to not only preserve his memory and achievements, but we also wanted to promote the sounds of the steel guitar. We’re helping fulfill that objective every time we play here,” said Steve Cheney. Along with his son, Ben, the Cheneys have been the Cultural Center’s Hawaiian steel guitar players since 1996.

It’s fitting they bring their own musical legacy to the Center. Steve’s late grandfather, Max Christiansen, learned to play the pedal steel almost 60 years ago. Steve, who also plays several other instruments, started to learn the steel in 1961 at age 13. 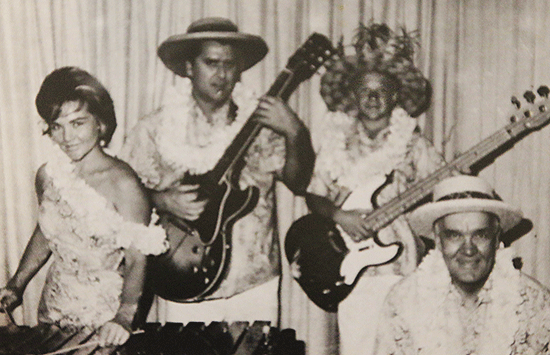 The Islanders family band: Steve Cheney playing the bass (upper right) with his (left-right) mom on the marimba, dad on guitar and grandfather on the pedal steel guitar in the early 1960s. (Photo courtesy of Steve Cheney)

He took his grandfather’s place in the family band, the Islanders, when he was proficient. By that point, the Islanders had been playing six days a week at the Hawaiian Restaurant on Highland Drive in Salt Lake City for years, until Garth Cheney moved his family to Kailua, Oahu, in 1964. He first played the steel guitar at the Polynesian Cultural Center’s “dining lānai,” now called the Hale Kuai, in 1971.

Re-learning to play the steel guitar

But tragedy struck in 1972. An industrial accident claimed the tip of Steve’s second finger and severely injured two other fingers on his left hand, which controls the steel bar.

“I had to relearn the steel. Luckily the doctor was able to save the tip of my index finger. At first, I tried to make a prosthetic, but it just didn’t work. It took me about a year to re-learn how to slant the steel with my ‘new’ fingers,” he said.

Ready to play again, Steve joined the Calabash Cousins along with other PCC musicians Cy Bridges, Jay Akoi, Harry Brown, and Joseph Cazimero. They played all around Oahu, “wherever we could get a gig,” he recalled. When that group broke up in 1979, Steve continued playing evening gigs at Paradise Cove for another five years. During the daytime, however, he focused on working fulltime at Brigham Young University–Hawaii. He started doing fine woodworking and cabinetry, and retired in 2011 — spending the last 23 years supervising the architectural department.

As Steve’s and his wife, Belinda’s, six boys and one girl came along, he taught most of them to play the steel guitar. With his outstanding woodworking skills, he also made their instruments.

Third-son Ben started at age 10. “Four of my sons eventually learned the steel guitar,” Steve said. “My second-to-youngest son, Sam, recently started to teach his daughter, Elia, how to play. She’s 10 years old.” In addition to his music, Ben graduated from Kahuku High in 1997, served as a Latter-day Saint missionary in Fukuoka, Japan, and graduated from BYUH in 2003 with a degree in TESOL.

For the past four years, Steve and Belinda have been serving as senior volunteers at the Cultural Center. “I wanted to give back,” he said.

What you may not know about the steel guitar

Because the steel guitar makes such beautiful sounds, we asked the Cheneys to tell us more about it: For example, how long does it take to learn to play one? 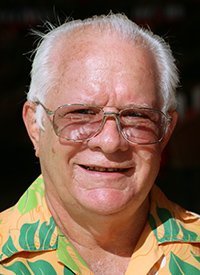 “If a person has the aptitude, he can pick it up reasonably quickly,” Steve replied. “But most people don’t, so nine-out-of-ten trying it will drop out. They just don’t have the patience for it.”

“It’s not easy to pick up. It’s not an instant gratification instrument. It takes patience to learn it. I’ve seen people who play good guitar who can’t pick it up.”

“It’s a visual instrument,” Ben added. “You have to look at where you are on the neck. Unlike a regular guitar, you can’t feel the frets because the steel guitar strings are elevated. Likewise, the steel bar has to be right on the fret-line, not in between like with a regular guitar or ukulele.”

Steve said, “If you look at steel guitar players, you almost never see them looking up. They’re almost always looking down at the frets to see where they are.”

He also said a lot of steel guitar players, “when they’re first learning, drop the bar, because it’s actually not held. It’s balanced on top of the strings. That takes a lot of finesse.” He explained that a steel guitar’s strings rest on higher top-and-bottom bridges to position them about a half-inch above the fretboard, vs. about an eighth-inch with a regular guitar.

The number of steel guitar strings and tunings

“Years ago most of the steel guitars just had six strings, but today most have eight strings, and some like ours have double necks with eight strings each. With an eight-string steel, you get a fuller sound, and you can do more,” Steve said. 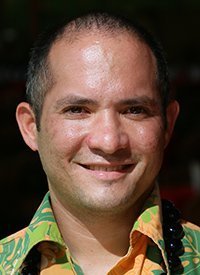 Ben added that with the eight strings, “the top-string is higher, and the bottom is lower. I can play on a six-string steel, but it’s just harder.”

“There are many different tunings on the steel guitar,” Steve continued, “but there are only a few popular ones. Some of the more popular tunings would be C6th, E7th and A. We use the B11th and E13th tunings on our respective fret-boards.”

Steve noted that his grandfather’s old pedal steel guitar was somewhat different. “First, he made his own pedal steel, just like I’ve made my own instruments. His had 10 strings: Ten and 12-strings are common for the pedal steel guitars. The pedals were used to increase or decrease the tension on the strings, to make the sound go up or down a half-step. The sound pedal steels produce is very common on country music, but not Hawaiian music.”

How to play the steel guitar

The Cheneys explained musicians use picks on the thumb and first two fingers to pluck and strum the strings, while they move the steel bar to change the notes.

Ben noted, “The thumb and first-four fingers are used to guide the steel bar, as it rests on top of the strings. Players choose their picks according to the thickness. I like mine slightly thinner, so they’re more flexible. He added that “asking to use another player’s picks is usually considered impolite: It’s too personal.”

“I like mine a little stiffer,” said Steve. “They wear out after a few years, so when I get new ones, I polish them. It takes a while to break them in and get them just the way I want.” 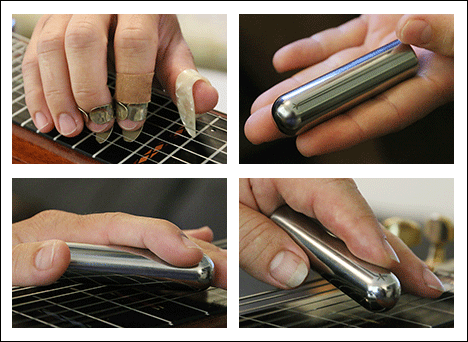 (Clockwise from top-left): The metal picks; the steel slider bar; tipping the steel for individual notes; and slanting the steel to create different chords. (Photos by Mike Foley)

Steve pointed out that the steel bar is sometimes tipped up to use the ball-end to single out notes. The bar is also sometimes slanted to create different chords. There’s even the more-angled “double-slant, and less-frequently used back-slant. That, I can’t do anymore, with my fingers,” he said. “But fortunately, it’s very rare.”

Additionally, chime-like sounds can be created by using the little finger to dampen the strings while plucking the strings above certain frets. Steve like to feature the chimes when he solos the song Moana Chimes, while Ben prefers to solo the chimes in Hilo March.

And finally, the octave-long “slide” at the end of many songs is a particularly well-known steel guitar technique.

In the market for a steel guitar?

Since not everyone can make their own steel guitars, as Steve Cheney does, both he and his son said the instruments can be purchased online now days. But be prepared to pay.

“I wouldn’t spend less than about $1,500 for a ‘good’ starter one with one neck,” Ben said. And Steve added that a “real decent one” costs about $4,000. Don’t forget to add the cost of a starter amplifier; and “a good-quality magnetic pick-up also makes a big difference in the sound.”

The emcee at the Polynesian Cultural Center Alii Luau introduces the steel guitar solo every afternoon, and explains how the distinctive instrument is tied to Laie. He also informs the audience what they are about to hear is an important part of PCC promoting the steel guitar.

The steel guitar has truly become synonymous with Hawaiian music since Joseph Kekuku first created its lovely sounds. Or as Steve likes to quote the late Jerry Byrd, who was the first inductee into the Steel Guitar Hall of Fame and was considered one of the best steel guitar players ever:

“The steel guitar is the signature sound of Hawaiian music throughout the world.”

Enjoy it every afternoon at the Polynesian Cultural Center in Laie.

Story by Mike Foley, who sometimes goes by the Hawaiian/Samoan name Mikaele, has been a full-time freelance writer and digital media specialist since 2002. Prior to that he had a long career in marketing communications, PR, journalism and university education. Foley learned to speak fluent Samoan as a Mormon missionary before moving to Laie in 1967 — and still does. He has traveled extensively over the years throughout Polynesia, other Pacific islands and Asia. Foley is mostly retired now, but continues to contribute to various PCC and other media.