Powerful Polynesian symbolism you can see at the Polynesian Cultural Center

Polynesians use symbols to represent ideas, emotions, states of mind, phrases, movements, memories, loved ones and much more. The symbols can be embodied in words, names, carvings, lei, designs, dance, music, and so on.

Hawaiians say many such representations have kaona, expressions with deeper meanings, concealed references or inuendos. The kaona might be beautiful or romantic, others sarcastic or pejorative. Many might appreciate an island song for its surface meaning, not realizing those who understand the kaona get a different meaning from the metaphorical words. Some kaona are very closely held by a few individuals or families, and others have faded into history, while still more are widely understood.

There’s a prominent bit of physical symbolism at the Polynesian Cultural Center visitors see in several of the villages.

The higher a house’s foundation, the more prominent the person who lives there. All other traditional houses usually  have minimal foundations or are at ground level.

■ The chief’s house in the Samoan Village: The maota ali’i is built on a higher foundation than any other structure there, as befits the chief’s status. 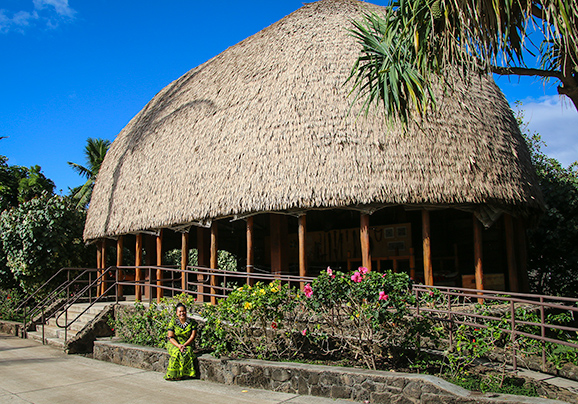 The maota ali’i, or chief’s house, in the Samoan Village has the highest foundation.

■ The scale-model replica of Queen Salote’s summer palace in the Tongan Village:  Its foundation also elevates the fale fakatu’i above all the others . 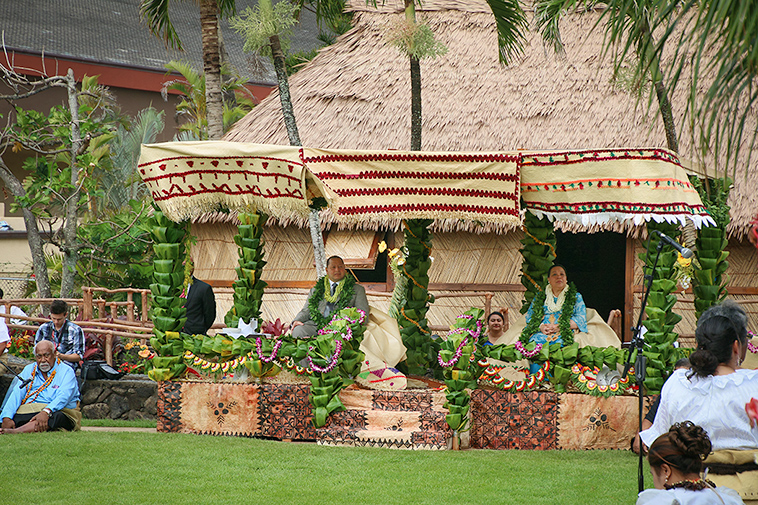 King Tupou VI (center-left) and Queen Nanasi Pau’u Tukuaho (center-right) of Tonga are seated in front of the Queen Salote summer palace in the Polynesian Cultural Center’s Tongan Village. Notice the foundation of the palace is three-steps-high.

■ When you look at the foundation of the hale ali’i or chief’s house in the Hawaiian Village, it’s not particularly elevated in comparison to the other buildings; however, the entire structure is built on the highest point of the village. (The structure with the roof line showing behind the chief’s house is the halau wa’a; built tall to accommodate the BYU-Hawaii/PCC sailing canoe Iosepa.) 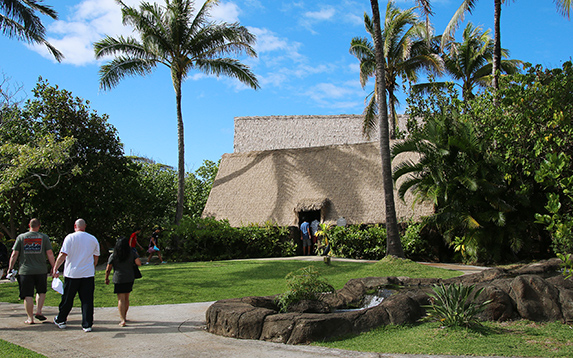 The hale ali’i, or chief’s house, is built at the highest point of the PCC’s Hawaiian Village.

■ And finally, while the chief’s house in the Fijian Village has distinctive differences from the other structures, it’s not particularly higher. That honor goes to the bure kalou or “spirit house,” which has the highest foundation in the entire Center. 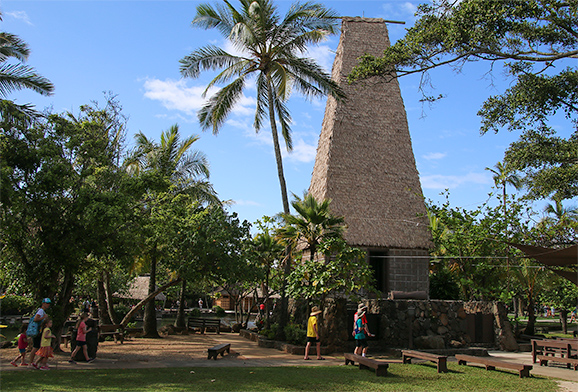 The PCC’s bure kalou or “spirit house” in the Fijian Village has the highest foundation of all.

Polynesian greeting words are another good example of expressing deeper feelings than a casual English “hi” or “hello.” People around the world understand that aloha can mean hello or goodbye in Hawaiian, but the word literally means “love.”

The Samoan greeting, similar to Hawaiian, uses the compound word tā + alofa — tālofa — which literally means “you and I love” [each other]. Sometimes Hawaiians who speak Hawaiian greet each other this same way by saying aloha kaua, which means the same as the Samoan greeting.

Other Polynesians greet each other wishing the other person “life,” or “good health” by extension. Maoris greet each other with “live!” — kia ora [literally the imperative kia + ora meaning “life”]. Tahitians say almost exactly the same thing, iaorana.

Story by Mike Foley, who has been associated with the Polynesian Cultural Center for over 50 years. He had a long career in marketing communications, PR, journalism and university education before becoming a full-time freelance writer and digital media specialist in 2002. Foley learned to speak fluent Samoan as a Latter-day Saint missionary before moving to Laie in 1967, and he still does. He has traveled extensively over the years throughout Polynesia, other Pacific islands and Asia. Though nearly retired now, Foley continues to contribute to PCC and a select few other media.