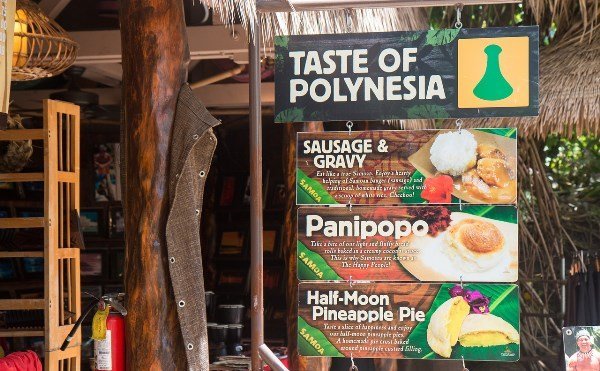 Take a Bite From the Past: Explore Authentic Polynesian Food in Hawaii

There are few food scenes as prolific and fascinating as that of the Polynesian islands. The term “melting pot” aptly describes Hawaii’s culinary history, with a rich legacy of explorers and Polynesian settlers mixing with immigrants from around the globe—and their traditional cuisines.

An authentic Polynesian experience in Hawaii can’t be separated from the foods that reflect this melding of cultures and flavors. Don’t miss a chance to sample these unique local and regional dishes at an authentic luau or a local plate lunch place, where each dish has its own story to tell.

The earth oven, or ground cooking, is a popular cooking method used by ancient civilizations from around the world. With few resources, this cooking technique instills great smoky flavors while tenderizing the meat. Using only heated rocks or coals buried in the ground, these earth ovens can cook an entire pig in about eight hours. Early Polynesian settlers are credited with establishing this cooking method on the islands and popularizing kalua pig and turkey—two succulent offerings made tender by the slow cooking process.

Preparing an earth oven is no small feat, but it continues to live on as the pièce de résistance of many luaus. The Ali’i Luau at the Polynesian Cultural Center provides an authentic immersion in Polynesian celebration rituals, including the Royal Court Procession and presentation of the underground oven.

Laulau, a traditional island entree steamed underground, is made from exotic spices mixed with pork shoulder, white fish or chicken wrapped with taro leaves. Steaming these pouches underground fuses the ingredients and tenderizes the meat.

Laulau is a popular plate lunch item usually served with a side of rice and macaroni salad. It’s also incredibly affordable, often costing less than $5.

Western whalers introduced the islanders to salted fish, or raw fish rubbed with salt. This was prepared with fresh tomato and onion to create a salmon salad, and is still served as a side dish on many traditional Hawaiian plates.

New variations of this salad came to include Japanese soy sauce, chili peppers from Portugal and Korean spices. Similar preparations are enjoyed in poke (cut or diced fish), which is eaten raw like ceviche with sea salt, candlenut and seaweed.

This mouthwatering, multicultural dish reflects the strong Indian influence on Fiji, which has over 300,000 Indians, or almost 40% of the total Fijian population, living there today.

Based on a home recipe of one of the Fijian staff, the Polynesian Cultural Center’s curry with chicken, carrots and tomatoes stewed with tantalizing Indian spices turns up the heat (in a good way). A little sweat will actually cool you off. Plus, it’s the perfect excuse to indulge afterwards in a refreshing Tongan ‘otai—a milky, seasonal fruit beverage that includes tropical treats, such as coconut cream, mango and lychee. The Fijian curry and Tongan ‘otai are just two of the several authentic Polynesian dishes you’ll find at the Polynesian Cultural Center.

The popularity of sweet breads in Hawaii took off in the 1950s after Robert Taira founded his namesake bakery in Hilo. The breads are characteristically light and fluffy with a mild sweetness. Taira’s bakery changed its name and became more popularly known as King’s Hawaiian, which can be found in grocery stores across the U.S.

Bread pudding is a popular dessert served on the islands made from these delicious local breads. Dried fruit like raisins are added, in addition to cinnamon and nutmeg to create a unique twist on the traditionally English dessert. Today, bread pudding is served as a sweet ending to many other Polynesian favorites.

The ethnic influences on traditional food from Polynesia have resulted in a robust culinary spectrum—balancing the Old World with the New. Don’t miss your chance to take a bite from the past on your next trip to Hawaii.

This article is brought to you by the Polynesian Cultural Center—all of Polynesia in one place. Click here to register for tours, luaus and special packages. Book tickets 10 days in advance and receive 10 percent off!