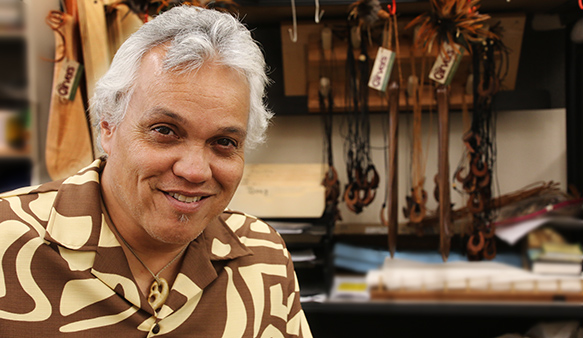 Doug Christy, a Maori carver at the Polynesian Cultural Center for the past 37 years, is continuing the legacy of his father, the late Epanaia Whaanga Christy. The senior Christy, or “Uncle Barney”, worked at the Center until just a few months before he passed away at age 83 in 2004.

Uncle Barney was already a skilled carver in New Zealand in the early 1960s when he joined the team that created the original carvings for the PCC’s Maori Village. Doug, who was born about that time in Hamilton, New Zealand, was only nine-years-old when the Center contracted Uncle Barney to come back in 1972 to restore the waka taua (war canoe) in the Maori Village.

“They liked what he did and asked him to stay,” said Doug, who has lived in Hawaii ever since. His dad arranged for him to get hired at age 15 and started training Doug. “My father opened up a book in my life that we weren’t able to close, and I’ve been able to carry on his legacy with the work that I now do here. When I get student workers to train these days, they make me proud of him.” 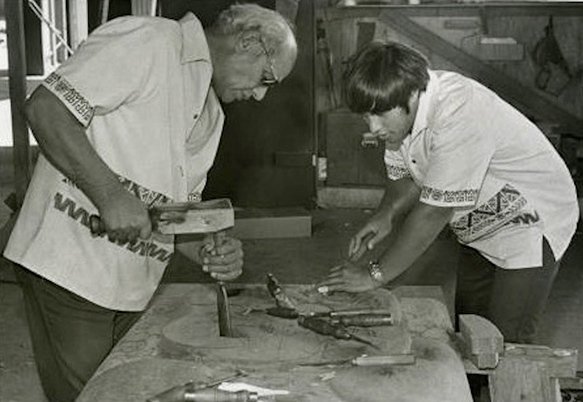 “Uncle Barney” Christy (left) works with Arthur Elkington, one of the students carvers in the 1970s. 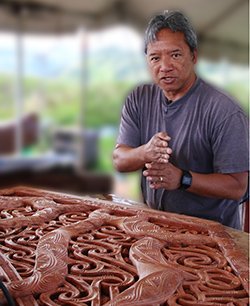 Christy also modestly thanks others at the Center who has also helped train him to become the carver he is today, including the late Tapusoa Tumu Purcell, a Samoan carver; Kawika Eskaran, a Hawaiian master carver; Maori carvers Jared Pere and Ken Coffey; and Kyle Alo, another Hawaiian carver who took his talents to Hollywood years ago. Eskaran, Pere and Christy still work together as PCC carvers.

“I’ve worked with them, learning their skills and different styles. They would help me learn how to do certain things. For example, I’ve also learned from master carvers from Tahiti how to make to’ere (wooden drums),” Christy said.

“I enjoy all of the styles, and I’m still learning. That’s the beauty of carving, especially in the Polynesian islands. I used to really try to keep it more pure — Tongan styles with Tongan carving and Maori with Maori, for example.

“But now…when you go on [the] internet and look at tattoo art, it’s all mixed up and is often called ‘tribal’ art. What does that mean? I’ve also learned that some of the islands — such as Tonga, Samoa and Fiji — share certain patterns. Sometimes the meanings are the same, sometimes they’re a little different.”

Walking further in his dad’s footsteps 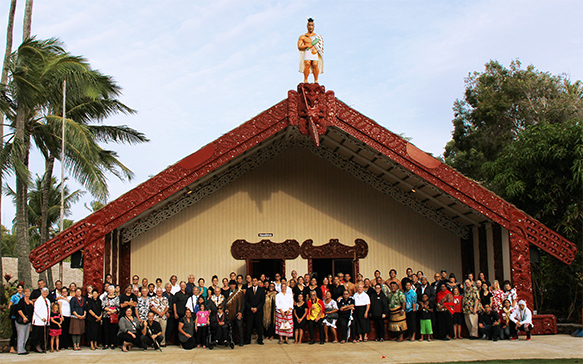 In addition to training under his father and the others, Christy also had the opportunity in 2011 to work briefly with famed Maori master carver Takaputai “Taka” Mete Walker, QSM, at his studio in Havelock North, New Zealand.

The PCC commissioned Walker — now in his late 80s and still carving in New Zealand — to help restore the carvings on the meeting house and others in the Maori Village. He had been the youngest man on the crew when Doug’s father helped make the original carvings for the PCC’s Maori Village. “Taka is the last living member of that crew, and I kind of got to walk in my dad’s footsteps being with him. He looked at me like I was one of his own.”

Where do the ideas come from

Asked how his creative process works, Christy said, “I can be in a regular conversation with somebody, and an idea will come up. There have also been a few times when I’ve been asleep, and I’ve had a dream. I see something, and I know that if I don’t get up right away and draw or write something down, it’s gone. I’ve learned a hard lesson a few times when I’ve let designs go. Now I keep a sketch book by my bedside.

“People don’t understand that I’m not like a light switch. I don’t just switch on and carve something. I have to think about projects and what I’m going to do. I have to create a design. Sometimes it’s all ‘boom!’ and I’ll run and do it. But it’s not always that easy.”

Still loves what he does

It’s obvious Christy loves what he does, and where he does it. “It’s been awesome working here at the Polynesian Cultural Center, especially working with my dad.” 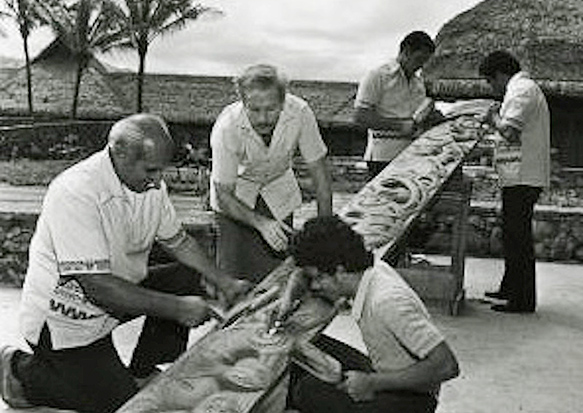 Story and photos by Mike Foley, who has been a full-time freelance writer and digital media specialist since 2002. Prior to then, he had a long career in marketing communications, PR, journalism and university education. The Polynesian Cultural Center has used his photos for promotional purposes since the early 1970s. Foley learned to speak fluent Samoan as a Latter-day Saint missionary before moving to Laie in 1967, and he still does. He has traveled extensively over the years throughout Polynesia, other Pacific islands and Asia. Though nearly retired now, Foley continues to contribute to PCC and other media.