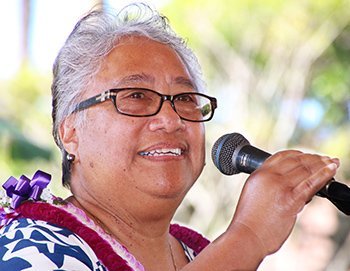 In tribute, Delsa Moe, PCC Vice President of Cultural Presentations, said Dela Rosa “has done her part to share aloha with many throughout her tenure at PCC. Although she has been a dancer, Hawaiian section instructor and kumu hula, Manager of Special Events and the Promo Team and currently serves as Theater Director, I don’t think it will be her titles or positions held that she will be remembered for.”

“Rather, I’m sure that those who’ve been blessed to know her will remember her for the patience she had when teaching someone to hula, for the hours she stayed awake to launder and iron costumes so tired performers could sleep before their next promo gig, for the many students she fed when they appeared at her home after the show or on Sundays, for the times she stayed back to clean up and lock up after a long rehearsal rather than delegating that to someone else, for making work fun with her infectious laugh and can-do attitude, for the high standards she expected from herself and others and the list goes on and on.” 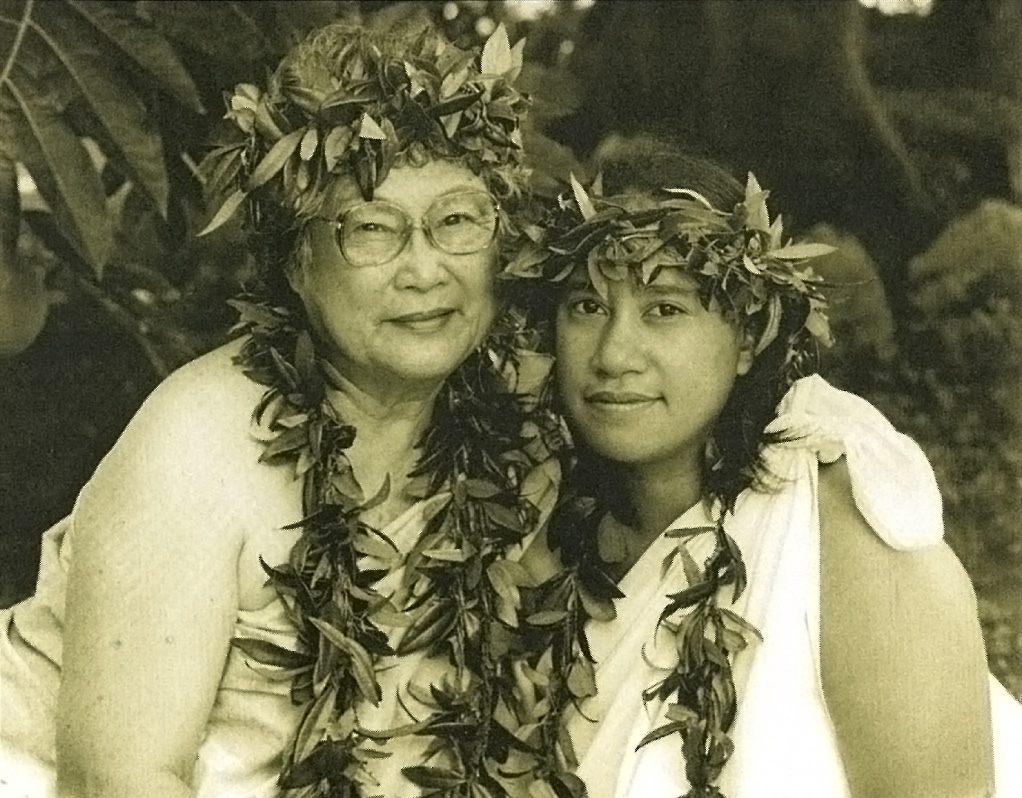 Aunty Gay, as she is known at PCC, was a high school sophomore at Kamehameha in 1967 — four years after the Center opened — when she got a call from her real aunt, Sally Wood Naluai, the PCC’s first kumu hula or hula master, who asked her to come dance in the evening show.

“I was shocked, because I was playing volleyball for Kamehameha, and I wondered, how am I going to get down to the Polynesian Cultural Center and dance,” she said. Fortunately for the PCC, she worked everything out, even after she graduated from high school and enrolled at the Church College of Hawaii (which was renamed BYU–Hawaii in 1974).

Before she earned a Bachelor’s Degree in Physical Education in 1973, she also worked as the PCC Guides Department Secretary for Haunani Kaanaanā Nash as well as a Maintenance Dispatcher. She then served a fulltime Latter-day Saint mission in the area surrounding Rapid City, South Dakota, working principally among Native Americans. She returned to her studies at the completion of her mission.

After graduating, she taught for one year at Kailua Intermediate School, and intended to go back, when “Aunty Sally called and wanted me to be the alaka’i or assistant instructor for the Hawaiian section” — a position her older sister, Sunday Mariteragi, had held from the beginning days of the PCC.

“When Aunty Sally asked me to come, Sunday was teaching school at Kahuku High and was very busy with all their activities. Aunty Sally guided me, but I really thank Sunday, too, for this opportunity.” 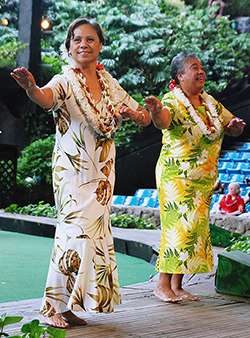 Dela Rosa, Sunday Kekuaokalani Mariteragi, Keith Awai and Cy Bridges sometimes refer to themselves as “hula brothers and sisters,” because they trained in hula together under Aunty Sally through the early 1980s and “graduated together” in a ceremony Hawaiians call uniki, which culturally qualified them to be kumu hula. From there, Mariteragi went on to start and oversee her own children’s hālau hula [hula school] in Laie, that to this day practices at the PCC where guests can observe and enjoy the process. Both Bridges and Awai retired recently after each worked for more than 40 years at the Polynesian Cultural Center. So, you could say it’s the end of an era.

“We four, even though we uniki’d from Aunty Sally, we still have different styles, and that’s okay; but I am so grateful for their influence on me. I always felt if there was anything I needed help with, I could count on them.”

“My first fulltime job with the PCC was in 1974,” Aunty Gay said. Even so, she admitted she wasn’t thinking in those days of spending the rest of her working life at the Center, or even of being so heavily involved with Hawaiian culture. “I wanted to teach young people,” Aunty Gay said; but she ultimately realized she fulfilled that desire by training, developing and overseeing several thousand talented PCC Theater Department performers over the next four decades.

Nephi Setoki during his days on the Promo Team

She added that she’s so proud of of them, citing as an example PCC’s current webmaster Nephi Setoki, who back in 1998 won a pre international solo hula competition. He “also served as the late Aunty Vai Fa’amaligi’s Samoan section lead, and when we started the Promo Team, he became one of my leads and then a supervisor.” She also cited Ray Magalei, another of her Promo Team leads who now serves as the PCC Vice President of Marketing. “Those guys came up from the ranks. You can’t say it any better. There are so many of our students who are here, and others who have gone back to help in their countries.”

“I think that’s what made me comfortable in retiring at this time,” she said. “These guys are right on. I definitely feel the Center is in good hands now.”

Aunty Gay also recalls memorable times working with her peers: “The funnest time I think I had was when the six instructors were back in the Theater in the mid-1980s. Fasi Tovo was over Tonga, Joe Tulele had Fiji, Uncle Tommy Taurima and then Aunty Niki Wallace were over New Zealand, Regina Pasi took care of Tahiti and Aunty Vai Fa’amaligi was over Samoa.”

“We had so much fun. Sure, we argued and played tricks on each other, but we also loved each other, and I get a little emotional just thinking about them. They were special. I learned a lot from all of them. I also learned a lot from Aunty Sally. We also had the funnest Theater parties and rehearsals. Those are the days I miss.”

During those years, in addition to working with the evening show, Aunty Gay also took leadership roles with the PCC’s Promo Team and Special Events, traveling all over the world in the former capacity: “My all-time favorite destination is Japan, because they’re so respectful of their culture and other cultures. That’s what I really appreciated,” she explained.

She was particularly impressed with promotional trips to Viet Nam, Cambodia and China. “As a team, this really helped us understand the ‘third world,’ and how fortunate we are to live comfortably here. Even though it may not look like we are, it’s a lot more comfortable here than every other place.”

For example she said her first trip to China years ago was an “eye-opener. I’ve just learned to appreciate, one, that wherever I am, it’s a blessing; and second, that the Gospel is still true, no matter how poor a country is. It was a blessing to travel.” 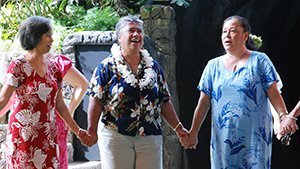 “I was also fortunate to work with a lot of productions — new shows, new choreographers, and new directors who came in. I was able to learn and pick up little things to add to whatever talents I already had,” Aunty Gay said. “Now, the challenges are still the same, but what I like more is that the focus is not only on the culture but on the students and how we need to help them and prepare them for when they leave the Center. We’re promoting character-building to help these young people.”

All of which required many long days: Aunty Gay could usually be found back-stage at the PCC every work-day from about 9 a.m. until after the evening show 12-plus hours later. “I didn’t really need to be there until about noon,” she said, “but I’ve never counted the hours. I just wanted to make sure that whatever I was accountable for, I could answer for.”

“We already miss Ellen Gay’s motherly presence backstage,” Delsa Moe said. “She was a mother figure to so many at work and away from work. She praised and scolded you like a mother because she cared for those she worked with. She shared her testimony often during cast meetings and that is one of the best treasures she has left with PCC.”

“But mostly, she will be remembered because she didn’t just teach the concept of ‘One Ohana Sharing Aloha’ [a PCC motto], she lived it. Mahalo, Ellen Gay, for adding to the richness of PCC’s legacy.”

Story and images by Mike Foley