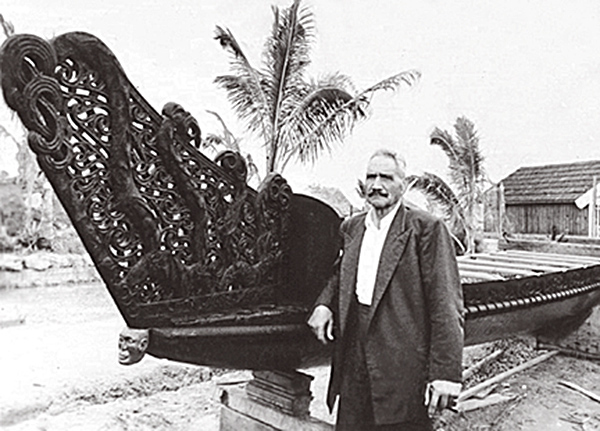 The late Hemi Whautere Witehira proudly stands by the Maori waka taua that he was instrumental in donating to the Polynesian Cultural Center in 1963.

Several months ago a woman in New Zealand contacted the PCC to tell us we had mis-identified her great-grandfather in a picture caption of our 60-foot-long 40-man waka taua or war canoe that’s been permanently berthed in the Maori Village for more than 50 years: She wanted to know if we could correct the caption, and what had happened to the canoe . . . which led to the following report.

With input from Cathie Joyce, the great-granddaughter, and our own Seamus Fitzgerald, a former PCC Maori cultural ambassador who’s now the Director of Talent Management, the caption has since been corrected: It now identifies the late Hemi Whautere Witehira (1881-1965), Joyce’s great-grandfather, standing next to the canoe.

A royal canoe repurposed: In the mid-1930s members of the Witehira and Wihongi families from the Nga Puhi tribe associated with the Puhi Moana Ariki Marae in Kaikohe, North Island, wanted to honor King George V of England by presenting him with a traditional Maori waka taua. The future-king had visited New Zealand in 1901 as the Duke of Cornwall and York during a tour of the British Empire.

They felled an immense kauri tree; but unfortunately, His Majesty passed away in 1936 before they made any further progress on the canoe, and the huge log remained in the forest for the next 20-plus years.

When the tribe learned that labor missionaries from The Church of Jesus Christ of Latter-day Saints, which began establishing congregations throughout the Pacific as early as 1844, had begun working in the early 1960s on the Polynesian Cultural Center in Laie, Hawaii — that included a Maori village, they decided to revive the canoe project. 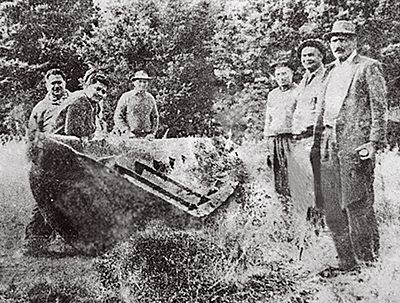 Witehira (right) and others by the canoe hull near Kaikohe, New Zealand.

They roughed out the canoe hull and carted it to Temple View, near Hamilton, New Zealand, where Maori labor missionaries  — some of whom had helped build the Church College of New Zealand and New Zealand Temple a few years before — and others had already started to work on components of the new Maori village in Hawaii.

Church leaders had commissioned Maori master carver John (Hone) Taiapa and his team to create the traditional houses and carvings. He in turn delegated Piri Poutapu, a noted waka carving expert from the Waikato region, to oversee the completion of the unique war canoe.

Though ill, Poutapu designed the detailed carvings, but turned to Tuti Tukaokao from Tauranga to do most of the actual work on the waka, including the taurapa (bow carving) and most of the rauawa or top-strakes. Jimmy Ruru from Gisborne carved the tauihu; and the other apprentices — Barney Christy, Oli MacKay, Taka Panere, Anaru Kohu and Taka Walker — who were primarily focused on carving the main meeting house and a smaller house, also took turns helping with the canoe. 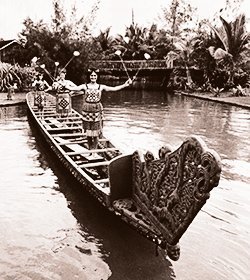 Maori villagers on the original waka on the PCC lagoon

Taiapa and the others worked feverishly in Temple View until it was time to ship the pieces to Hawaii, re-assemble and install them in Laie just prior to the Center’s opening on October 12, 1963.

Two side-notes: Christy later moved to Laie and served as the PCC’s Maori master carver for more than 30 years. He retired in June 2004 and passed away in Laie a few months later. Also, the PCC commissioned Walker, QSM, now a renowned octogenarian Maori master carver in Havelock North, New Zealand, and the last of the original carvers still living, to overhaul all of the original carvings in preparation for the Center’s 50th anniversary in 2013.

In the early days of the PCC, Maori villagers actually launched the waka on the Center’s freshwater lagoon; but it was long ago put on display under its own canoe hut. It has been refurbished several times over the decades since, and it is currently undergoing another major renovation. 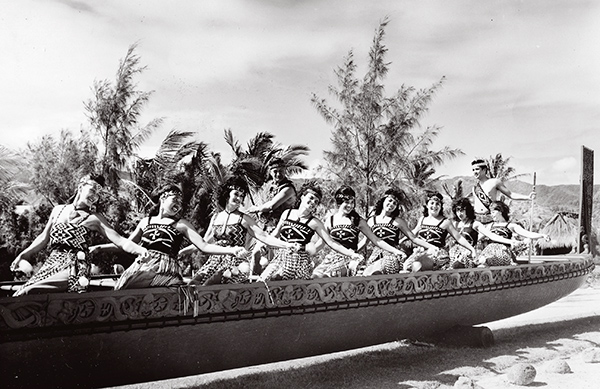