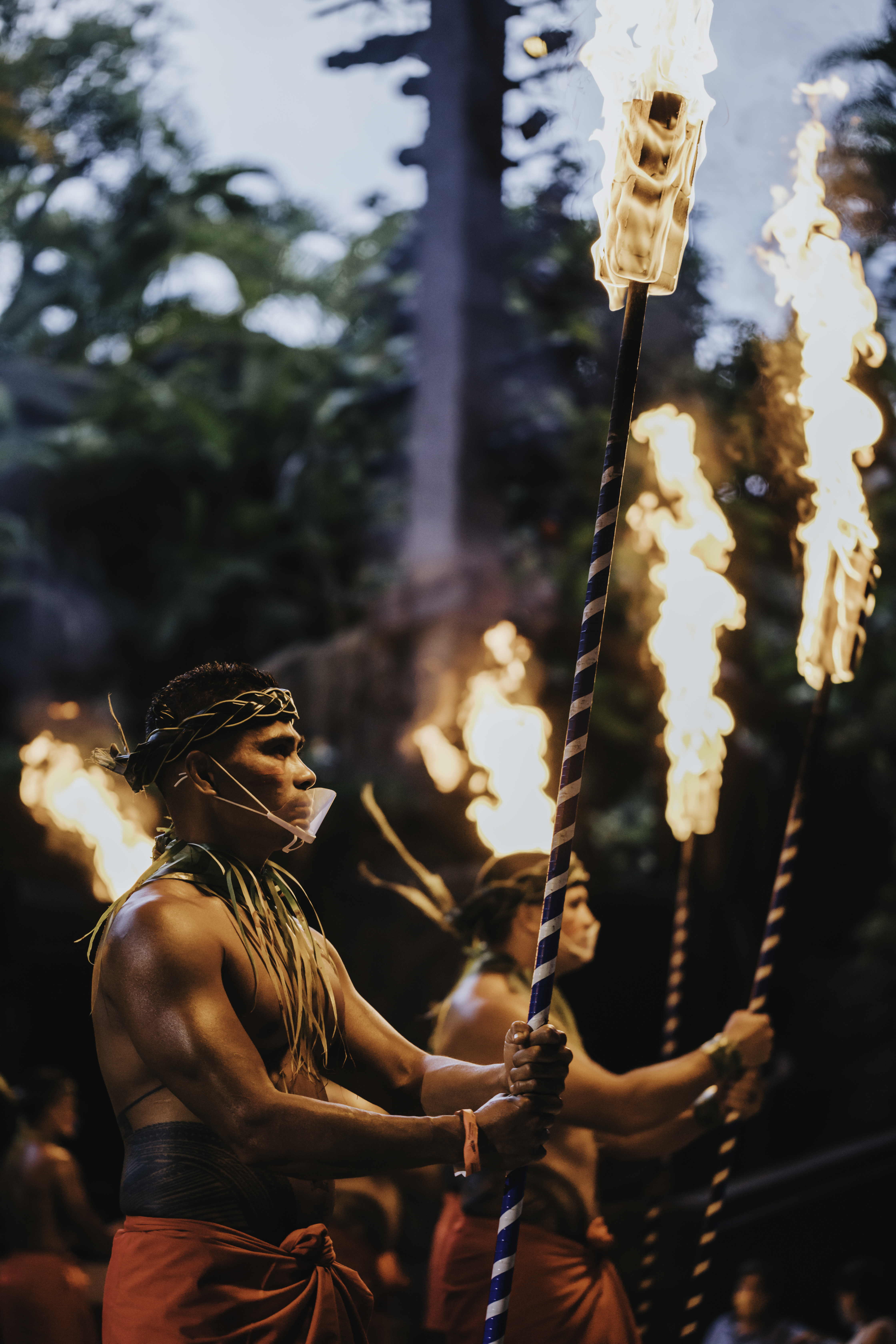 The 28th Annual World Fireknife Championship is now history. Although there were delays due to national and state health and safety concerns, the commitment of the competitors and the loyalty of the audiences inspired this year’s World Fireknife championship. The competition was moved to the Pacific Theater to accommodate social distancing, and the Polynesian Cultural Center adhered to state guidelines in order to put on this year’s event.

This year’s competitors have flare!

After the unprecedented cancellation of last year’s scheduled World Fireknife Championship, the Polynesian Cultural Center was excited to host the 28th annual competition. Delsa Moe and Steven Laulu were the announcers for this year’s two-week event. We witnessed some amazing talent from our competitors in our Junior and Intermediate divisions on April 28th and our Men’s division on May 5th. The Polynesian Cultural Center was excited to once again host the annual World Fireknife Competition after the unexpected cancellation of last year.

Fireknife stems from the ancient gestures of a victory in battle when warriors wielded a hand-held wooden weapon called nifo oti or “deadly tooth.” Check out the world fireknife site for more info/ history! The judges and audience can look for traces of the dance’s warrior past. Some things the  judges look for are the complexity of each maneuver, the speed at which these moves are executed, and the transitions between each routine. Criteria such as these push our competitors to a level of excellence that makes for a thrilling show! 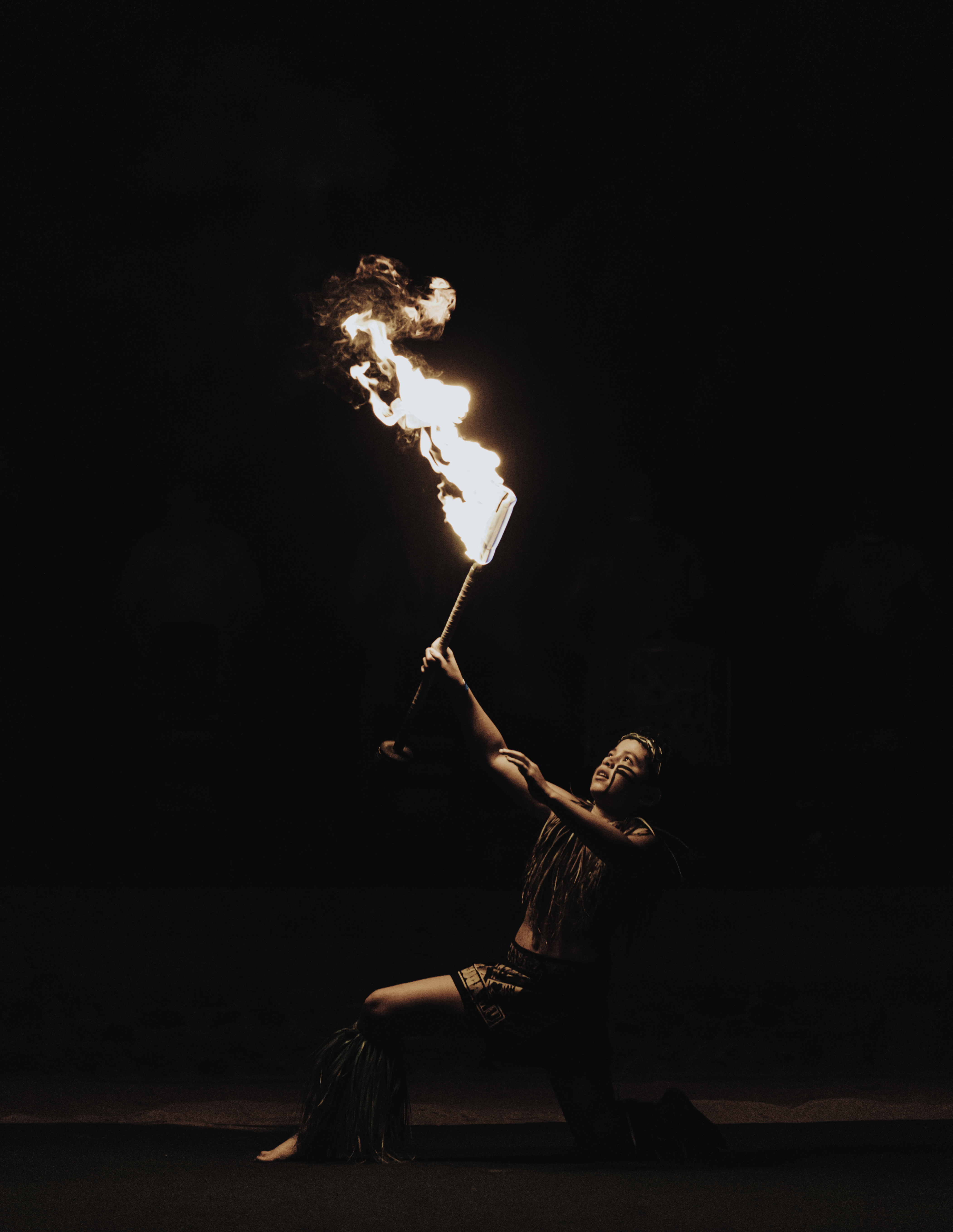 Our Junior division (ages 6-11) kicked-off the competition with stunning performances done by our young competitors. These warriors interacted with the crowd and tackled some complex routines. Joe Milford of Punaluu was blazing with energy as he performed and won first place in the Junior division. Elway Tora of Laie placed 2nd and Vincent Galeai of Laie placed 3rd. 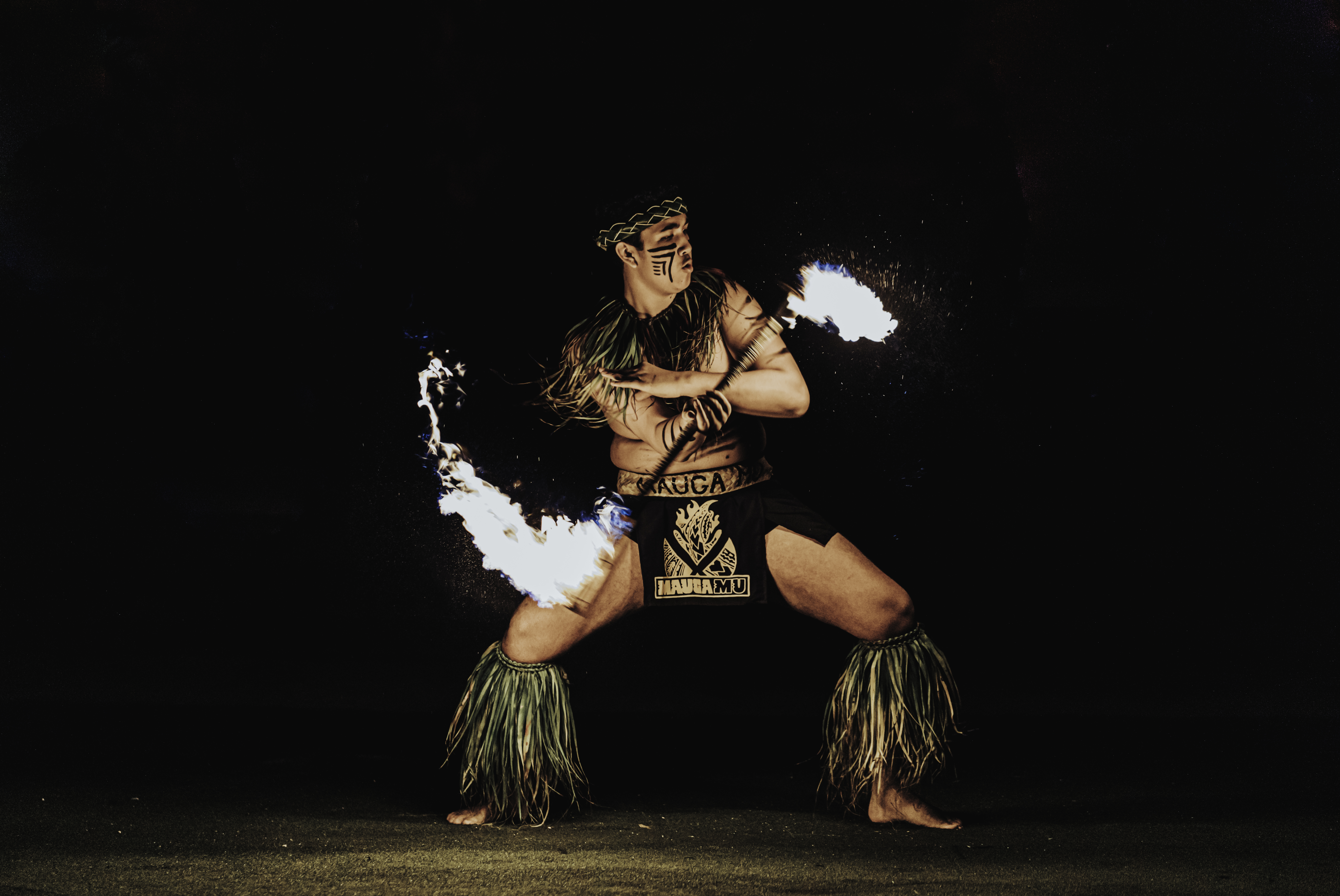 Directly after the Junior division, the competition invited the Intermediate division (ages 12-17) to take to the stage. The audience clearly did not lose their steam as they continued to enthusiastically “cheehoo” for these competitors. Spectators witnessed an outstanding display of skill from 1st place winner Isaako Milford of Punaluu. His brother Toaalii Milford of Punaluu followed by coming in 2nd place with Kekai Nielsen-Cabacason of Kaneohe in 3rd.

Prior to crowning the winners of the Men’s Division, the crowds witnessed some amazing talent from the female fireknife dancers. Although small in number, our lady warriors performed with incredible skill. We enjoyed performances from Natali Oloa of Waialua, Chandae and Aliyah Ava of Laie, and Nei Moana Henriques of Waipahu. During her routine, Henriques invited other fireknife dancers, including Mikaele Oloa, to join her to pay in paying respects to Tuika, Oloa’s older brother.

Men’s Divisions on May 5th 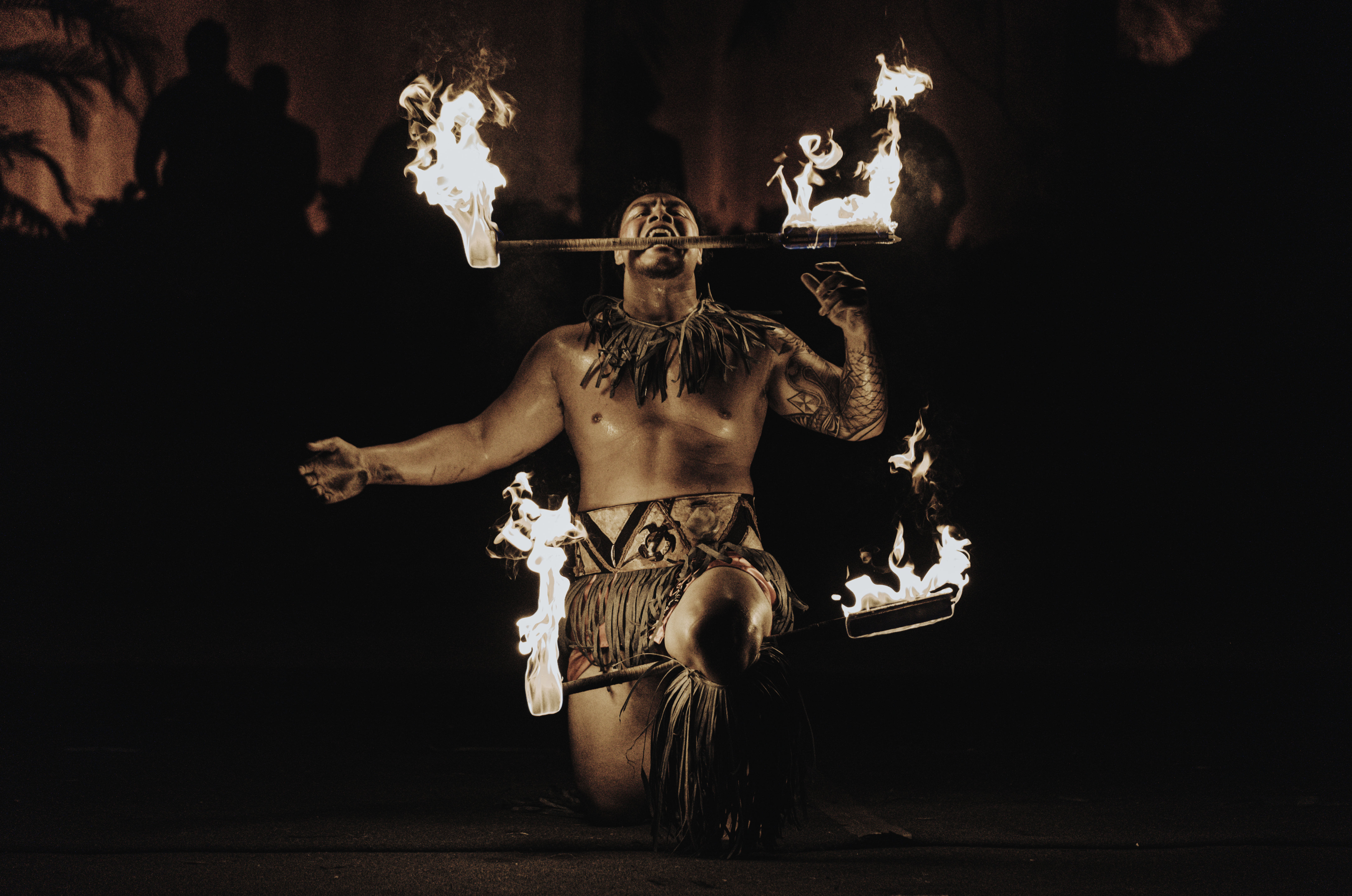 On May 5, the crowds were back to show support for the Men’s division. Here we witnessed Hale Motuapuaka of Aiea command the stage. He is our only “grand slam champion,” meaning that in addition to being the men’s world champion twice, he’s also won the Junior and Intermediate championship multiple times.  Motuapuaka’s hard work and years of practice paid off as he was crowned the 2021 World Fireknife champion. He dedicated his performance to his uncle, Papa Harry, who recently passed. He honorably gave a powerful performance that truly demonstrated his expertise and understanding of the dance. Motuapuaka walked away with a $5,000 cash prize, a canvas print of an original painting by Kap Tafiti, a stylized nifo oti, a palefuiono (ceremonial crown) and other cultural adornments. For more info about Motuapuaka check out this video from Sports People Hawaii. 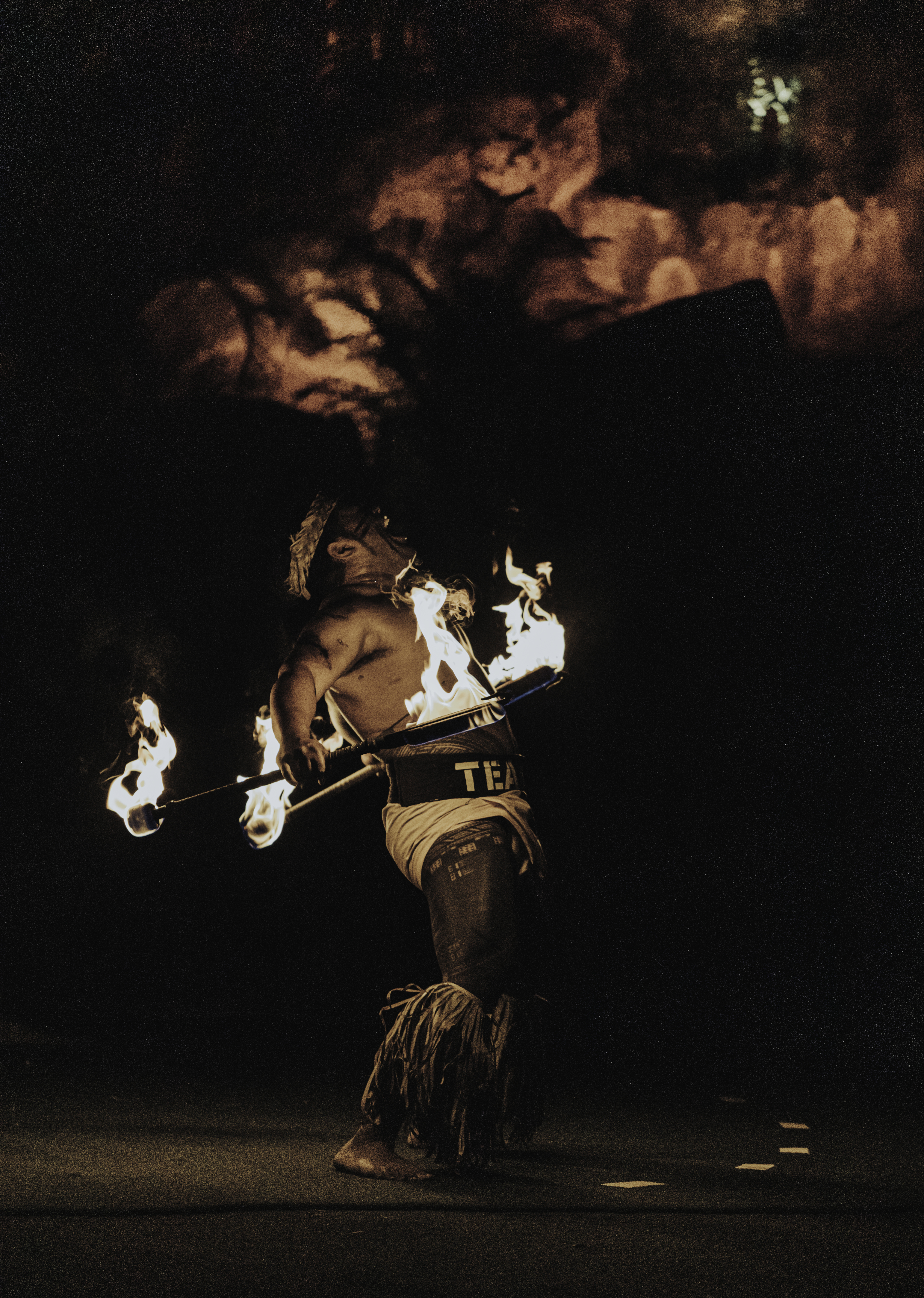 Mikaele Oloa of Waialua took 2nd place, adding to his former competition winnings of the years 2005, 2006, 2009, 2010, 2016. His performance, along with other family members, paid tribute to his elder brother, Tuika, who had recently passed away. These performances are often an embodiment of not only the competitor’s diligence and commitment to the sport, but also a reflection of family members and friends who have influenced their paths. 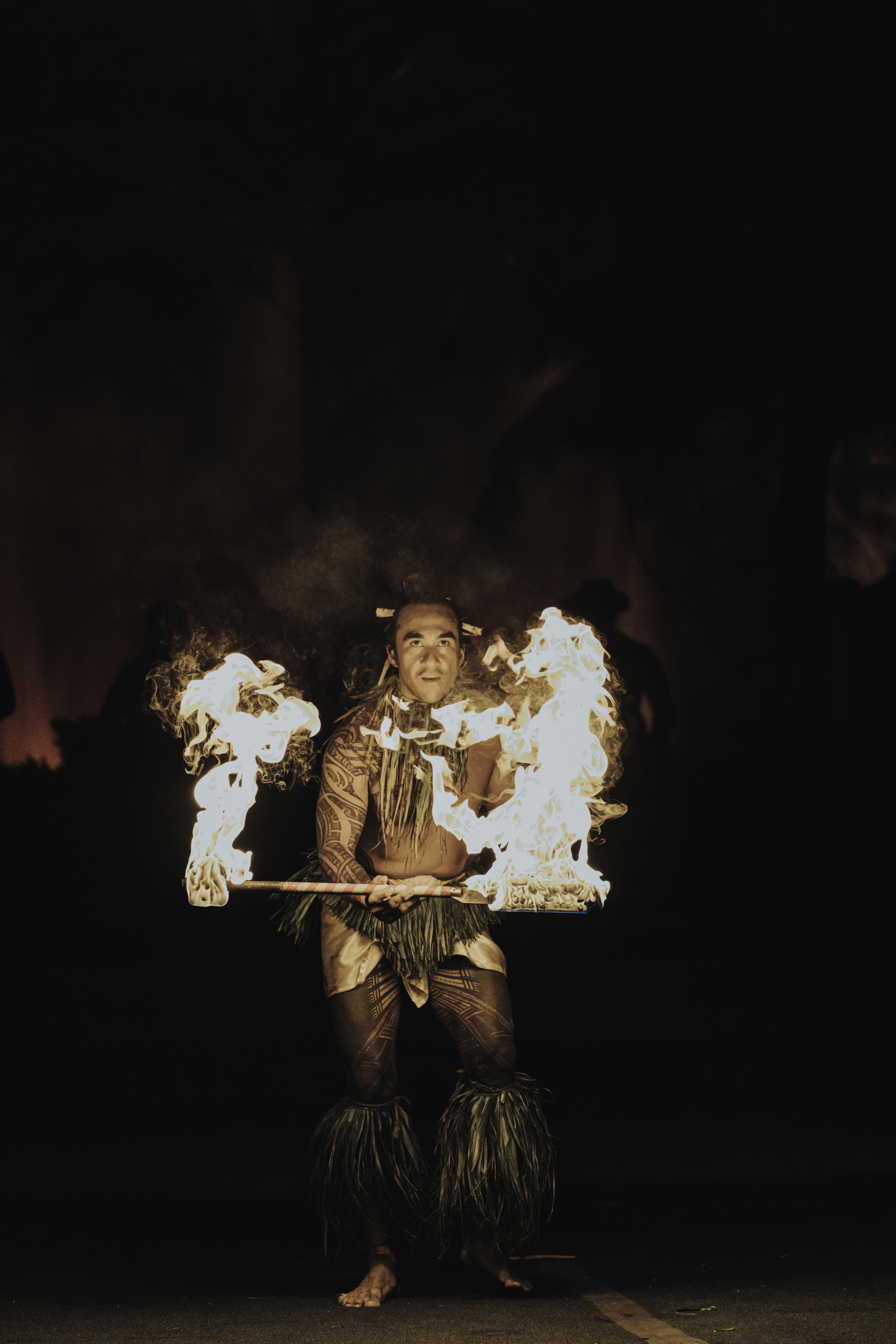 Kepanipaa Damaso of Waikoloa, Hawaii placed 3rd in the Men’s Division. His performance was one that was worth watching! He said that although performing for a live audience is nerve racking, it is also empowering. The audience was able to see the intensity and warrior demeanor Damaso sustained throughout his performance. It was truly a powerful way to wrap up another great competition!

If you missed this year’s competition, we will be hosting the 29th Annual World Fireknife Championship tentatively scheduled for the first part of May next year. Live streaming will again be available; however, nothing beats the in-person experience of a competitor’s finesse and skill. Next year be sure to come, see, and be prepared to be blown away!